NASA's Mission to Touch the One Million Degrees Fahrenheit Sun 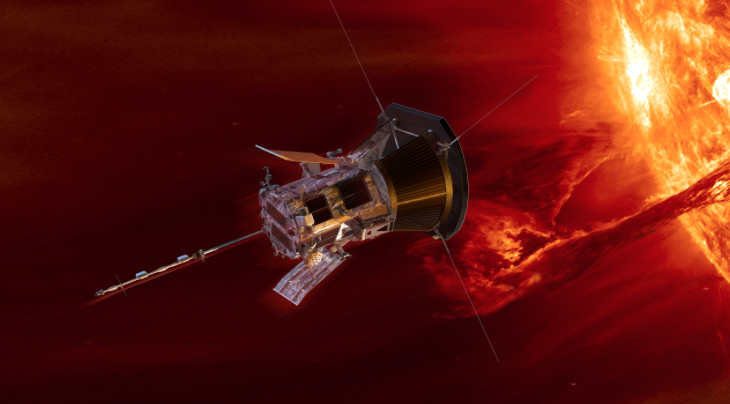 Early on an August morning, the sky near Cape Canaveral, Florida, will light up with the launch of Parker Solar Probe. No earlier than August 6, 2018, a United Launch Alliance Delta IV Heavy will thunder to space carrying the car-sized spacecraft, which will study the Sun closer than any human-made object ever has.

"We've been studying the Sun for decades, and now we're finally going to go where the action is," said Young. 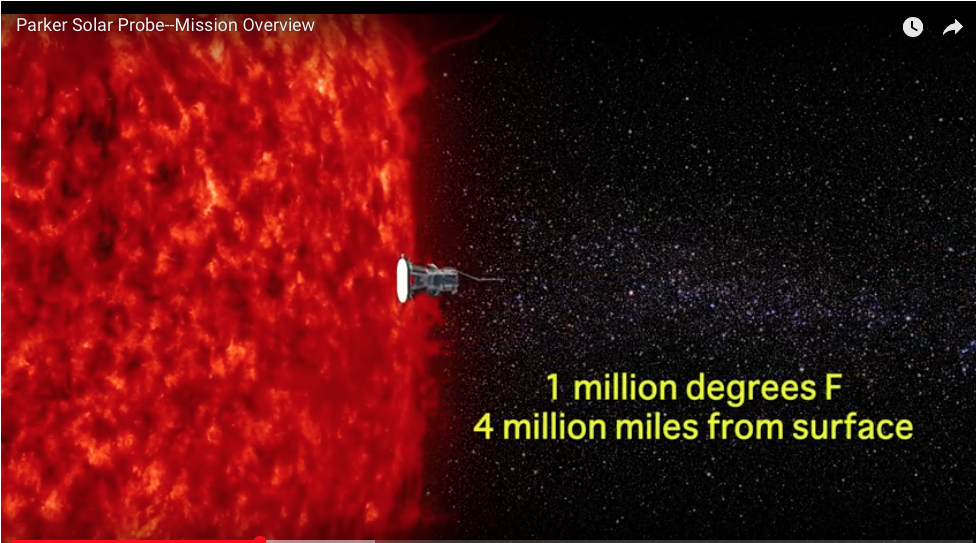 Parker Solar Probe will swoop to within 4 million miles of the sun's surface, facing heat and radiation like no spacecraft before it. Launching in 2018, Parker Solar Probe will provide new data on solar activity and make critical contributions to our ability to forecast major space-weather events that impact life on Earth. Credits: NASA's Goddard Space Flight Center

Our Sun is far more complex than meets the eye. Rather than the steady, unchanging disk it seems to human eyes, the Sun is a dynamic and magnetically active star. The Sun's atmosphere constantly sends magnetized material outward, enveloping our solar system far beyond the orbit of Pluto and influencing every world along the way. Coils of magnetic energy can burst out with light and particle radiation that travel through space and create temporary disruptions in our atmosphere, sometimes garbling radio and communications signals near Earth. The influence of solar activity on Earth and other worlds are collectively known as space weather, and the key to understanding its origins lies in understanding the Sun itself.

“The Sun’s energy is always flowing past our world,” said Fox. “And even though the solar wind is invisible, we can see it encircling the poles as the aurora, which are beautiful – but reveal the enormous amount of energy and particles that cascade into our atmosphere. We don’t have a strong understanding of the mechanisms that drive that wind toward us, and that’s what we’re heading out to discover.”

That's where Parker Solar Probe comes in. The spacecraft carries a lineup of instruments to study the Sun both remotely and in situ, or directly. Together, the data from these state-of-the-art instruments should help scientists answer three foundational questions about our star. 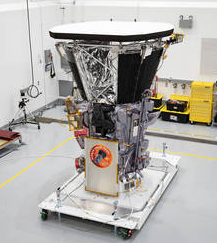 A Sun-skimming mission like Parker Solar Probe has been a dream of scientists for decades, but only recently has the needed technology – like the heat shield, solar array cooling system, and fault management system – been available to make such a mission a reality. Credits: NASA/Johns Hopkins APL/Ed Whitman Parker Solar Probe Beauty Images

One of those questions is the mystery of the acceleration of the solar wind, the Sun's constant outflow of material. Though we largely grasp the solar wind's origins on the Sun, we know there is a point – as-yet unobserved – where the solar wind is accelerated to supersonic speeds. Data shows these changes happen in the corona, a region of the Sun's atmosphere that Parker Solar Probe will fly directly through, and scientists plan to use Parker Solar Probe's remote and in situ measurements to shed light on how this happens.

Second, scientists hope to learn the secret of the corona's enormously high temperatures. The visible surface of the Sun is about 10,000 F – but, for reasons we don't fully understand, the corona is hundreds of times hotter, spiking up to several million degrees F. This is counterintuitive, as the Sun's energy is produced at its core.

"It's a bit like if you walked away from a campfire and suddenly got much hotter," said Fox.

Finally, Parker Solar Probe's instruments should reveal the mechanisms at work behind the acceleration of solar energetic particles, which can reach speeds more than half as fast as the speed of light as they rocket away from the Sun. Such particles can interfere with satellite electronics, especially for satellites outside of Earth's magnetic field.

The FIELDS suite, led by the University of California, Berkeley, measures the electric and magnetic fields around the spacecraft. FIELDS captures waves and turbulence in the inner heliosphere with high time resolution to understand the fields associated with waves, shocks and magnetic reconnection, a process by which magnetic field lines explosively realign.

The WISPR instrument, short for Wide-Field Imager for Parker Solar Probe, is the only imaging instrument aboard the spacecraft. WISPR takes images from of structures like coronal mass ejections, or CMEs, jets and other ejecta from the Sun to help link what’s happening in the large-scale coronal structure to the detailed physical measurements being captured directly in the near-Sun environment. WISPR is led by the Naval Research Laboratory in Washington, D.C. 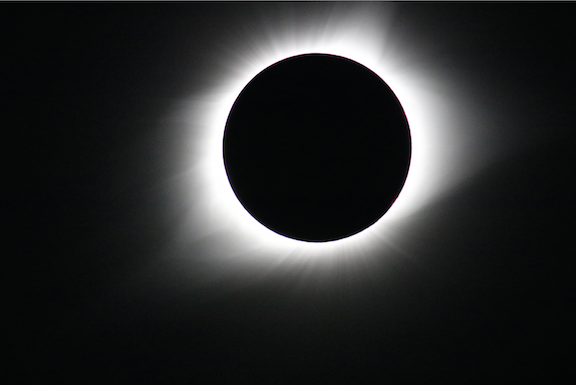 Parker Solar Probe will explore the corona, a region of the Sun only seen from Earth when the Moon blocks out the Sun's bright face during total solar eclipses. The corona holds the answers to many of scientists' outstanding questions about the Sun's activity and processes. This photo was taken during the total solar eclipse on Aug. 21, 2017. Credits: NASA/Gopalswamy NASA Eclipse Imagery

Another suite, called SWEAP (short for Solar Wind Electrons Alphas and Protons Investigation), uses two complementary instruments to gather data. The SWEAP suite of instruments counts the most abundant particles in the solar wind — electrons, protons and helium ions — and measures such properties as velocity, density, and temperature to improve our understanding of the solar wind and coronal plasma. SWEAP is led by the University of Michigan, the University of California, Berkeley, and the Smithsonian Astrophysical Observatory in Cambridge, Massachusetts.

Finally, the ISÊ˜IS suite – short for Integrated Science Investigation of the Sun, and including Ê˜, the symbol for the Sun, in its acronym – measures particles across a wide range of energies. By measuring electrons, protons and ions, ISÊ˜IS will understand the particles’ lifecycles — where they came from, how they became accelerated and how they move out from the Sun through interplanetary space. ISÊ˜IS is led by Princeton University in New Jersey.

Parker Solar Probe is a mission some sixty years in the making. With the dawn of the Space Age, humanity was introduced to the full dimension of the Sun's powerful influence over the solar system. In 1958, physicist Eugene Parker published a groundbreaking scientific paper theorizing the existence of the solar wind. The mission is now named after him, and it's the first NASA mission to be named after a living person.

Only in the past few decades has technology come far enough to make Parker Solar Probe a reality. Key to the spacecraft's daring journey are three main breakthroughs: The cutting-edge heat shield, the solar array cooling system, and the advanced fault management system.

“The Thermal Protection System (the heat shield) is one of the spacecraft’s mission-enabling technologies,” said Andy Driesman, Parker Solar Probe project manager at the Johns Hopkins Applied Physics Lab. “It allows the spacecraft to operate at about room temperature."

Using data from seven Sun sensors placed all around the edges of the shadow cast by the heat shield, Parker Solar Probe's fault management system protects the spacecraft during the long periods of time when it can't communicate with Earth. If it detects a problem, Parker Solar Probe will self-correct its course and pointing to ensure that its scientific instruments remain cool and functioning during the long periods when the spacecraft is out of contact with Earth.

Parker Solar Probe's heat shield – called the thermal protection system, or TPS – is a sandwich of carbon-carbon composite surrounding nearly four and half inches of carbon foam, which is about 97 percent air. Though it's nearly eight feet in diameter, the TPS adds only about 160 pounds to Parker Solar Probe's mass because of its lightweight materials.

Though the Delta IV Heavy is one of the world’s most powerful rockets, Parker Solar Probe is relatively small, about the size of a small car. But what Parker Solar Probe needs is energy – getting to the Sun takes a lot of energy at launch to achieve its orbit around the Sun. That's because any object launched from Earth starts out traveling around the Sun at the same speed as Earth – about 18.5 miles per second – so an object has to travel incredibly quickly to counteract that momentum, change direction, and go near the Sun.

The timing of Parker Solar Probe's launch – between about 4 and 6 a.m. EDT, and within a period lasting about two weeks – was very precisely chosen to send Parker Solar Probe toward its first, vital target for achieving such an orbit: Venus.

“The launch energy to reach the Sun is 55 times that required to get to Mars, and two times that needed to get to Pluto,” said Yanping Guo from the Johns Hopkins Applied Physics Laboratory, who designed the mission trajectory. “During summer, Earth and the other planets in our solar system are in the most favorable alignment to allow us to get close to the Sun.”

The spacecraft will perform a gravity assist to shed some of its speed into Venus' well of orbital energy, drawing Parker Solar Probe into an orbit that – already, on its first pass – carries it closer to the solar surface than any spacecraft has ever gone, well within the corona. Parker Solar Probe will perform similar maneuvers six more times throughout its seven-year mission, assisting the spacecraft to final sequence of orbits that pass just over 3.8 million miles from the photosphere.

“By studying our star, we can learn not only more about the Sun,” said Thomas Zurbuchen, the associate administrator for the Science Mission Directorate at NASA HQ. “We can also learn more about all the other stars throughout the galaxy, the universe and even life’s beginnings.”

Parker Solar Probe is part of NASA’s Living with a Star Program, or LWS, to explore aspects of the Sun-Earth system that directly affect life and society. LWS is managed by NASA’s Goddard Space Flight Center in Greenbelt, Maryland, for the Heliophysics Division of NASA’s Science Mission Directorate in Washington. Johns Hopkins APL manages the Parker Solar Probe mission for NASA. APL designed and built the spacecraft and will also operate it.