RISAT-2B, the satellite due to be launched before dawn on May 22 from Sriharikota, will mark the resumption of a vital ring of Indian all-seeing radar imaging satellites after seven years. 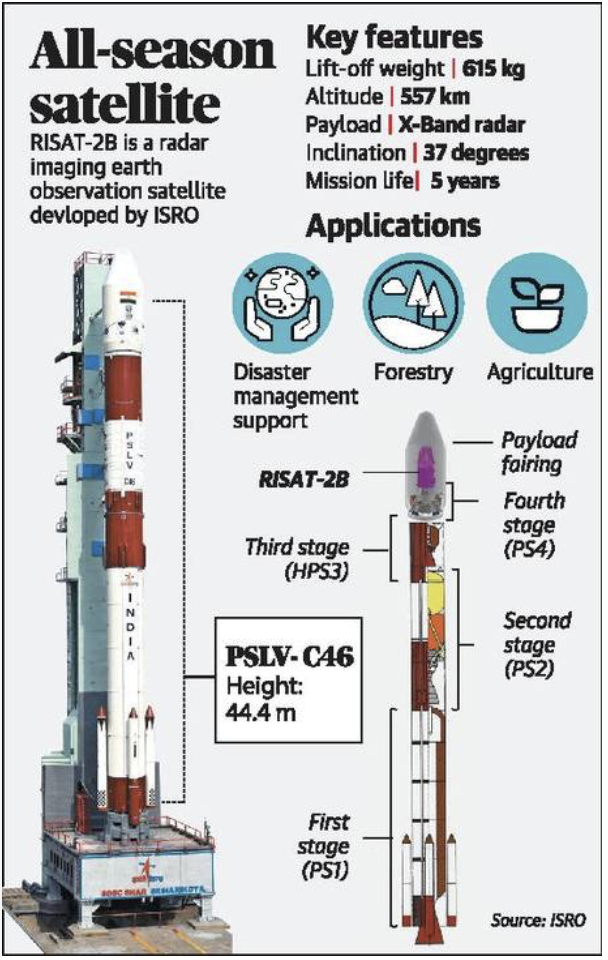 At least a half-dozen could be foreseen in the near future, mainly to add to the reconnaissance capability from about 500 km in space. A constellation of such space-based radars means a comprehensive vigil over the country.

In a recent conversation with The Hindu, Indian Space Research Organisation Chairman K. Sivan had said many RISATs were planned. RISAT-2B is to be followed by RISAT-2BR1, 2BR2, RISAT-1A, 1B, 2A and so on. If ISRO orbited its first two radar satellites in 2009 and 2012, it plans to deploy four or five of them in 2019 alone.

When it is cloudy or dark, ‘regular’ remote-sensing or optical imaging satellites — which work like a light-dependent camera — cannot perceive hidden or surreptitious objects on the ground. Satellites that are equipped with an active sensor, the synthetic aperture radar (SAR), can sense or ‘observe’ Earth in a special way from space day and night, rain or cloud. This all-weather seeing feature is what makes them special for security forces and disaster relief agencies.

“Radar imaging satellites are at a premium in the Earth observation scene,” said Mukund Rao, former Deputy Director of Earth Observation Systems at ISRO and now professor at the National Institute for Advanced Studies, Bengaluru. “Worldwide, quite a few of them are planned to be launched. There is also a large availability of radar images data in the market.”

A radar imaging satellite is complex to assemble. Interpreting its images is equally complex. ISRO took almost 10 years to realise RISAT-1, said an another expert who did not wish to be named. It sends much heavier data than plain remote sensing satellites.

“In India we also use radar imaging for crop estimation because our main crop growing season of kharif is in May-September when it rains and gets cloudy. We have used this data extensively for forestry, soil, land use, geology and during floods and cyclone.”

By Madhumathi D.S. , From The Hindu