A very exciting announcement came from Israel Aerospace Industries (IAI)’s MBT Space facility in Yehud, Israel, nonprofit SpaceIL and IAI when they announced a lunar mission will launch from Cape Canaveral, Florida, this December, and land on the moon on February 13, 2019. They stated that a final launch date will be announced closer to the event. The project has been made possible with the assistance of some generous donors, not the least by SpaceIL's President Mr. Morris Kahn who donated US$27 million. 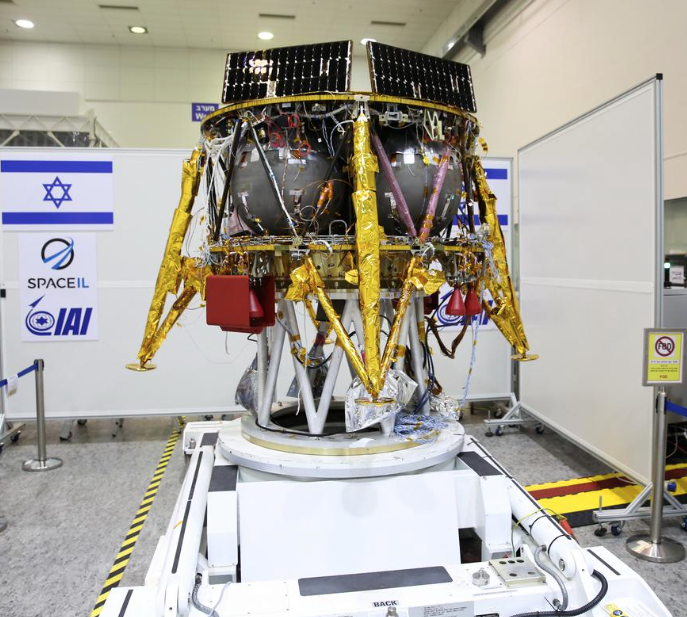 The first Israeli lunar spacecraft in the clean room.

The lunar landing will culminate eight years of intensive collaboration between SpaceIL and IAI, and will make Israel the fourth country after the U.S., China and Russia to reach the moon. The spacecraft will be launched as a secondary payload on a SpaceX Falcon 9 rocket from Cape Canaveral, Florida, and its journey to the moon will last about two months, ending on its expected landing date. The Israeli lunar spacecraft will be the smallest to land on the moon, weighing only 1,322 pounds, or 600 kilograms.

Approximately $88 million (NIS 320 million) has been invested in the spacecraft’s development and construction, mostly from private donors, headed by SpaceIL President Mr. Morris Kahn, who donated about $27 million, or NIS 100 million.

Mr. Morris Kahn, President of the non-profit organization SpaceIL said that after eight challenging years, he is filled with pride that the first Israeli spacecraft, which is in its final construction and testing phases, will soon be making its way to the moon. He had experienced numerous challenges in his life, but this was the greatest challenge of all. This is a huge achievement for them – SpaceIL – and for their partners, Israel Aerospace Industries, who have been with them since day one. The launch of the first Israeli spacecraft will fill Israel, in its 70th year, with pride. It is a national accomplishment that will put them on the world’s space map.

Dr. Ido Anteby, SpaceIL CEO added that SpaceIL, in collaboration with IAI, is embarking on the final leg of its complex mission to land the first Israeli spacecraft on the moon. In the coming months the spacecraft will undergo a series of intensive checks and tests at IAI, to prove that it will withstand the launch, flight and landing conditions. The excellent teams of SpaceIL and IAI are working with determination to complete this unique technological challenge in time for the launch date this December. 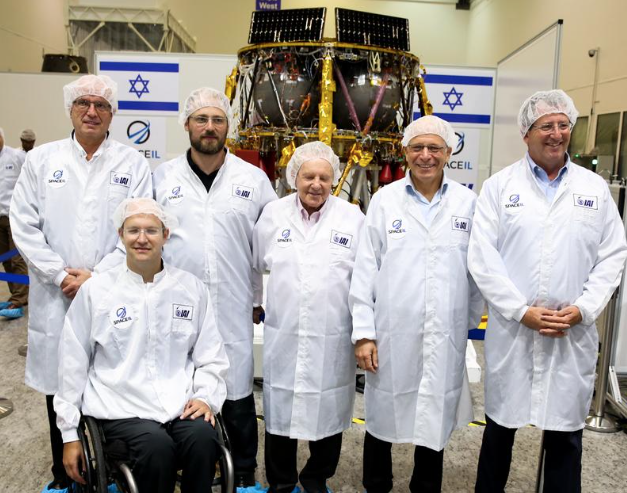 Mr. Josef Weiss, IAI CEO concluded that as one who has personally brought the collaboration with SpaceIL to IAI, he regards the launch of the first Israeli spacecraft to the moon as an example of the amazing capabilities one can reach in civilian space activity. The State of Israel, which is already firmly planted in the realm of space in its military activity, must harness resources for the benefit of civilian space, which is an engine of innovation, technology, education and groundbreaking around the world. The accomplishment they will soon achieve is the fruit of intensive labor of many years, of the best of minds. Reaching such an achievement specifically during Israel’s 70th year symbolizes how far they have come, and particularly the endless accomplishments that they can still achieve. IAI will continue doing all that is needed in the coming months to ensure the success of this national mission.

Although this is an historic national achievement, it is essentially a private initiative by the three SpaceIL founders — Yariv Bash, Kfir Damari and Yonatan Winetraub — who strived to fulfill the dream of reaching the moon, and registered for the challenging Google Lunar XPRIZE competition.

Since SpaceIL’s establishment, the mission of landing an Israeli spacecraft on the moon has become a national project embodying educational values, funded by donors such as Dr. Miriam and Mr. Sheldon Adelson, Mr. Sammy Sagol, Mrs. Lynn Schusterman, Mr. Steven Grand and others. Kahn, a businessman and philanthropist, took it upon himself to lead this project and bring it to its completion, and regards it as his personal mission.

IAI, which is the home of Israel’s space activity, has been a full partner in this project from its inception. Over the years, additional partners from the private sector, from government companies and from the academia have joined as well. The most prominent among these are Weizmann Institute of Science; Israel Space Agency; the Ministry of Science, Technology and Space; Bezeq and others. 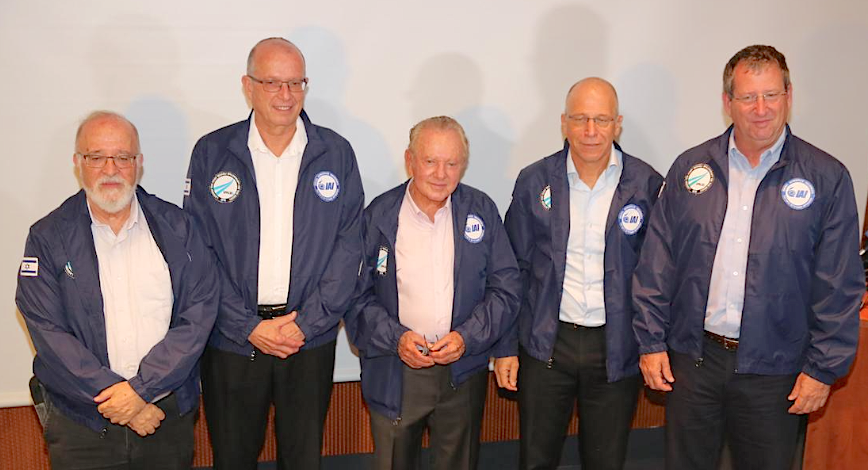 The spacecraft’s design and development process, which involved intensive work of engineers, scientists and team members, began in 2013 and continued until last year, when its construction at the IAI MABAT Plant commenced. The spacecraft, which weighs only about 600 kilograms, is considered the smallest to land on the moon. It is 1.5 meters, or over 4.9 feet high, 2 meters or six-and-a-half feet in diameter, and the fuel it will carry will comprise some 75 percent of its total weight. Its maximum speed will reach more than 10 km per second (36,000 kilometers, or nearly 22,370 miles, per hour).

SpaceIL’s spacecraft will be launched on a SpaceX Falcon 9 rocket from Cape Canaveral, Florida. It will be the secondary payload, launched with other satellites.

The spacecraft’s journey to the moon

SpaceIL CEO Dr. Ido Anteby revealed the spacecraft’s course to the moon during the press event. From the moment of its launch, it will begin a long, complex flight course. The spacecraft will disengage from the launch rocket at an altitude of 60,000 kilometers, or 37,282 miles, and will begin orbiting Earth in elliptical orbits. Upon receipt of a command from the control room, the spacecraft will enter a higher altitude elliptical orbit around Earth, which will reach a point near the moon. At this point, it will ignite its engines and reduce its speed to allow the moon’s gravity to capture it. It will then begin orbiting the moon, until the appropriate time to begin the landing process. This process will be executed autonomously by the spacecraft’s navigation control system. The entire journey, from launch to landing, will last approximately two months.

Upon its landing on February 13, 2019, the spacecraft, carrying the Israeli flag, will begin taking photos and video of the landing site and will measure the moon’s magnetic field as part of a scientific experiment conducted in collaboration with Weizmann Institute. The data will be transmitted to the IAI control room during the two days following the landing.

SpaceIL was the only Israeli contestant in the international Google Lunar XPRIZE competition. To win the first prize of $20 million, the participants were required to land an unmanned spacecraft on the moon. The competition ended officially with no winner on March 31, when Google announced that it would no longer sponsor it.

After succeeding in raising the critical funds to continue its activity, SpaceIL announced that it was determined to continue on its mission and to launch its spacecraft by the end of the year, regardless of the competition. Concurrently, the non-profit is continuing its efforts to raise the funds necessary to complete this mission.

SpaceIL aims to set in motion an “Apollo effect” in Israel: To encourage the next generation of Israeli children to choose to study science, technology, engineering and mathematics (STEM); to change their perception of these subjects; to generate a sense of capability; and to allow them to dream big dreams even in their small country. The non-profit aims to change the discourse in Israel and to encourage boys and girls to regard science, engineering, technology and math as exciting opportunities for their future. In recent years, SpaceIL has ignited the imagination of about 900,000 children nationwide, with the help of a broad network of volunteers.