With a focus on oceanography and the monitoring of air pollution, the 3.4 ton South Korean Chollian-2B satellite is looking at a launch date of February 18 from the Guiana Space Center via an Arianespace Ariane-5 launch vehicle. 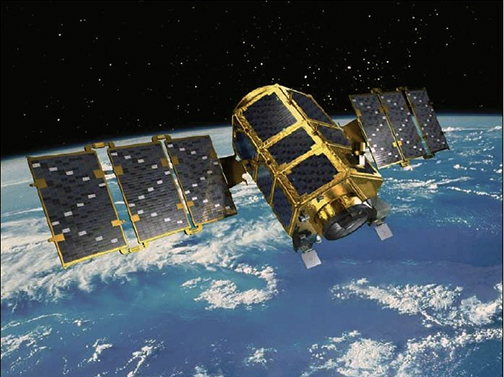 Artistic rendition of the Chollian-2B satellite.

Image is courtesy of KARI.

The Korean Aerospace Research Institute (KARI) stated that this is the first time a GEMS (Geostationary Environmental Monitoring Spectrometer) has been installed on a geostationary satellite. An additional GOCI-2 sensor to monitor the ocean environment is also aboard the satellite. According to the director of the satellite program for KARI, the satellite will be able to capture more accurate weather data forecasts as well as provide information to assist the nation's agencies in reducing pollution in the region.

In December of 2018, South Korea launched the sister satellite, Chollian-1, for EO and oceanography monitoring and is equipped with AMI (Advanced Meteorological Imager) and KSEM (Koren Space Environment Monitor) payloads.

Both of the Chollian spacecraft are follow-ups to the nation's first geostationary meteorological satellite, that being the Chollian-1, and greatly improve on that satellite's data download speed as well as its imagery capabilities. The Cholian-2B will offer 4x sharper resolutions than the sensors already on-orbit and, within a 10-day timeframe, can examine an area of 2,500 kilometers (1, 553 miles).

The operational lifetime expectancy for the Chollian-2B is approximately ten years and was funded by the government to the tune of 386.7. billion won ($324 million).