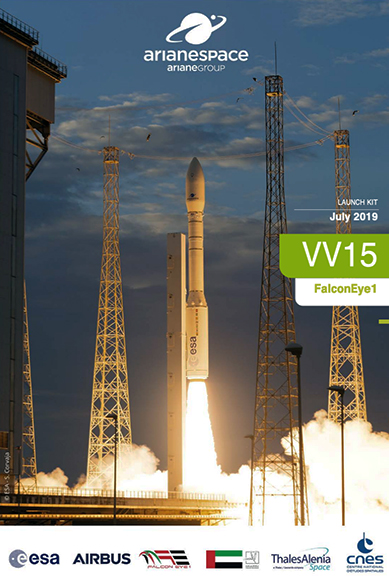 Arianespace is reporting that continuing, adverse weather conditions have required a postponement for the Vega Flight VV15 launch.

As high-altitude winds above the Spaceport in French Guiana remained unfavorable, Arianespace decided not to attempt a launch of Flight VV15 with the United Arab Emirates’ FalconEye1 satellite on July 7.

The new target date will be announced as soon as possible based on the evolution of weather conditions.

The Vega launcher and its FalconEye1 satellite payload remain in a stabilized and safe configuration at the Spaceport’s SLV launch site.

The Arianespace Flight VV15 with the FalconEye1 payload aboard the firm's Vega launch vehicle has been postponed due to bad weather.

Originally scheduled for launch on Friday, July 5, the new window for the event is July 7, for this sixth launch of the year for the company and the 15th Vega mission since the launcher started its career at the Guiana Space Center in 2012.

The FalconEye1 is a United Arab Emirates EO satellite that was developed by prime Airbus Defence and Space, with co-prime being Thales Alenia  Space. The FalconEye1 is destined for a Sun-Synchronous Orbit (SSO).