Arianespace Prepping for Flight VV14 and Flight VS22 Launches

The Spaceport is busy with activity as preparations advance for the next Vega and Soyuz missions that will mark Arianespace’s third and fourth flights of 2019, respectively, as the company builds upon two launch successes performed earlier this year. 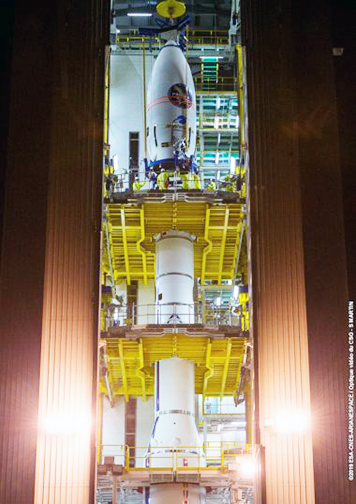 Encapsulated in its protective payload fairing, PRISMA is positioned atop Vega during activity at the Spaceport’s SLV launch complex.

First in line is the Vega launch, designated Flight VV14 in Arianespace’s numbering system, which will deliver the PRISMA (PRecursore IperSpettrale della Missione Applicativa) Earth Observation satellite to SSO on a mission targeted for March 21. The launcher has completed its build-up at the Spaceport, allowing final checkout to begin. This assembly process concluded with integration of Vega’s “upper composite,” consisting of PRISMA and its protective payload fairing. Installation took place at the Spaceport’s SLV launch site, inside the facility’s protective mobile gantry.

NOTE: Due to additional checks for the VV14 mission — which initially was scheduled on March 14 from the Guiana Space Center (CSG) — the flight has been postponed by several days. The Vega launch vehicle and the PRISMA spacecraft are in stable and safe conditions. The new targeted launch date for the PRISMA satellite is Thursday, March 21, 2019.

PRISMA was built for the ASI Italian space agency by OHB ITALIA as prime contractor, with LEONARDO responsible for the payload. Once operational, the satellite will provide major applications to protect both our planet and Italy’s national environmental safety. Fitted with a state-of-the-art, electro-optical instrument, made by a medium resolution photo camera sensitive to all the visible range (panchromatic) and by an innovative hyperspectral sensor, it will employ these capabilities for environmental monitoring, resources management, identification and classification of crops, fight against pollution, etc.

PRISMA will be the third satellite launched at the service of ASI by Arianespace, whose backlog comprises two other spacecraft for the Italian space agency. The PRISMA satellite was designed and manufactured by a consortium of Italian companies led by OHB ITALIA which provided a dedicated platform hosting the payload supplied by LEONARDO. 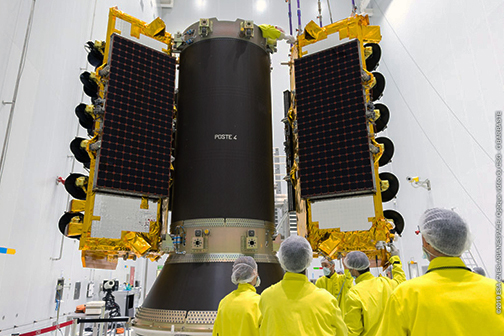 The second of four O3b satellites to be orbited on Arianespace’s upcoming Soyuz mission is integrated on the dispenser system during activity in the Spaceport’s S5 payload preparation building.

Payload integration is also underway for Arianespace’s second Soyuz mission of 2019 — Flight VS22 — which will further expand the SES-owned O3b satellite constellation delivering low-latency, fiber-like connectivity to customers in more than 40 countries. The second of four O3b satellites to be orbited on Arianespace’s upcoming Soyuz mission is integrated on the dispenser system during activity in the Spaceport’s S5 payload preparation building. This integration involves a step-by-step installation of the spacecraft on a tube-shaped dispenser system, with the activity taking place inside the Spaceport’s S5 payload preparation facility.

The O3b fleet of MEO satellites is a proven non-geostationary constellation that provides commercial broadband services today, delivering carrier-grade services. The first 16 spacecraft for O3b were successfully orbited by four Soyuz vehicles operating from French Guiana in 2013, 2014 and 2018. Each satellite — built by Thales Alenia Space — weighs about 700 kg. at launch and provides more than 10 Gbps of capacity.

By increasing the size of the O3b constellation from 16 to 20 satellites, SES Networks will offer enhanced coverage while providing greater service availability and reliability – responding to increasing demand for bandwidth from governments, as well as the telecom, cloud, maritime and energy markets.

Arianespace has a busy launch schedule in 2019, targeting up to 12 missions from the Spaceport using its heavyweight Ariane 5, medium-lift Soyuz and lightweight Vega. The company kicked off its launch calendar with the Ariane 5 flight that orbited Saudi Geostationary Satellite 1/Hellas Sat 4 and GSAT-31 on February 5; which was followed by the history-making first launch of OneWeb satellites, performed February 27 by Soyuz.