[Satnews] According to the 8th edition of Euroconsult's newly published report, Satellite-Based Earth Observation: Market Prospects to 2024, more than 400 civil and commercial Earth observation (EO) satellites (>50kg) are expected to be launched over the next decade as compared to 179 over the 2005-2014 timeframe. 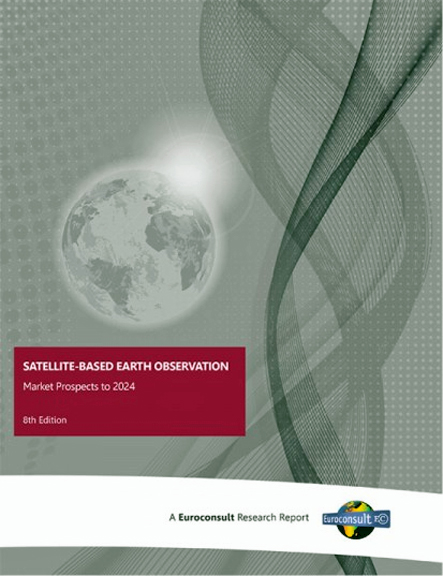 This will result in $39 billion in manufacturing revenues over the period, an 80 percent increase over that of the previous decade. The increasing satellite unites will arrive from both government and private sources as more countries invest in EO technologies and the commercial business continues to evolve. In addition, more than 1,200 <50kg satellites are anticipated to be launched to support the development of cubesat constellations, adding to the overall data supply.

Earth observation remains a government priority
Over 50 countries are now investing in EO programs, with total global investment close to $9 billion in 2014, a 9th year of continued investment growth. Investment is expected to top $10 billion in 2015. Government priorities depend on the stage of development of their EO program, and wider government policy objectives. Environment monitoring and climate change remain top priority areas in governments' political agendas, supporting the development of science-driven EO missions within R&D programs such as NASA, ESA and JAXA; other EO programs are expanding rapidly with countries such as India and China striving towards self-sufficiency for data collection.

Commercial data market returns to strong growth
The commercial data market totaled $1.6 billion in 2014; this represents 12 percent growth over 2013, and a five-year CAGR of 7 percent. This return to growth follows a couple of years' slowdown resulting from the reduced procurement by U.S. defense. Growth over the last year is in part a result of U.S. defense procurement stabilizing and then increasing following the launch of DigitalGlobe's WorldView-3. Non-U.S. defense sales also continue to grow strongly brought about by continued global tensions and limited proprietary very-high resolution data supply. Discounting the U.S., global defense spending for commercial data stood at $620 million in 2014, and has grown at 13 percent CAGR over the last five years. Altogether, defense markets represent close to $1 billion, 61 percent of the total data market.

Non-defense markets totaled more than $600 million in 2014. Natural resources monitoring and support to infrastructure and engineering projects are important application areas in developing regions to support wider economic growth. However, sectors such as energy have been impacted by lower oil and gas prices limiting exploration activities. Location-based services applications, including market and business intelligence applications, have also been slower to develop; however the longer term outlook for these services remains positive with the addition of new supply targeting high frequency change detection.

In 2024, the market for commercial EO data is expected to reach $3.5 billion. Regionally, the Asian markets, Latin America and Africa are expected to have strong growth profiles. Natural resources management, engineering & infrastructure, LBS and again defense are expected to be the main application areas supporting growth.

Several of these new companies are expected to develop low-cost constellations. To date, Euroconsult identifies 12 companies (such as BlackSky Global, Spire, etc.) which have announced intentions to develop such constellations based on smallsat and cubesat technologies as EO embraces the "New Space" environment. The purpose of the data from these satellites varies, however all are focused on acquiring data and delivering services at high frequency with a reduced satellite revisit.

Satellite-Based Earth Observation, Market Prospects to 2024 is the only report providing industry forecasts, assessment of business opportunities and analysis of the entire value chain for this growing segment of the satellite industry. The 8th edition of this landmark report includes a detailed breakdown of application sectors within each region along with consolidated forecasts per application sector and per region.

"As of July 2015, these companies have attracted over $450 million in venture capital to fund their initiatives, and Skybox Imaging was acquired by Google for $500 million. This level of private investment is unprecedented in the EO sector," said Adam Keith, Managing Director of Euroconsult Canada and editor of the report. "For these constellations to come to fruition, additional investments are expected to be required; however the EO ecosystem will continue to evolve." Under the lower-cost approach, reducing the CAPEX means that operators can price data very competitively with the potential to disrupt the market and/or open up new business areas.