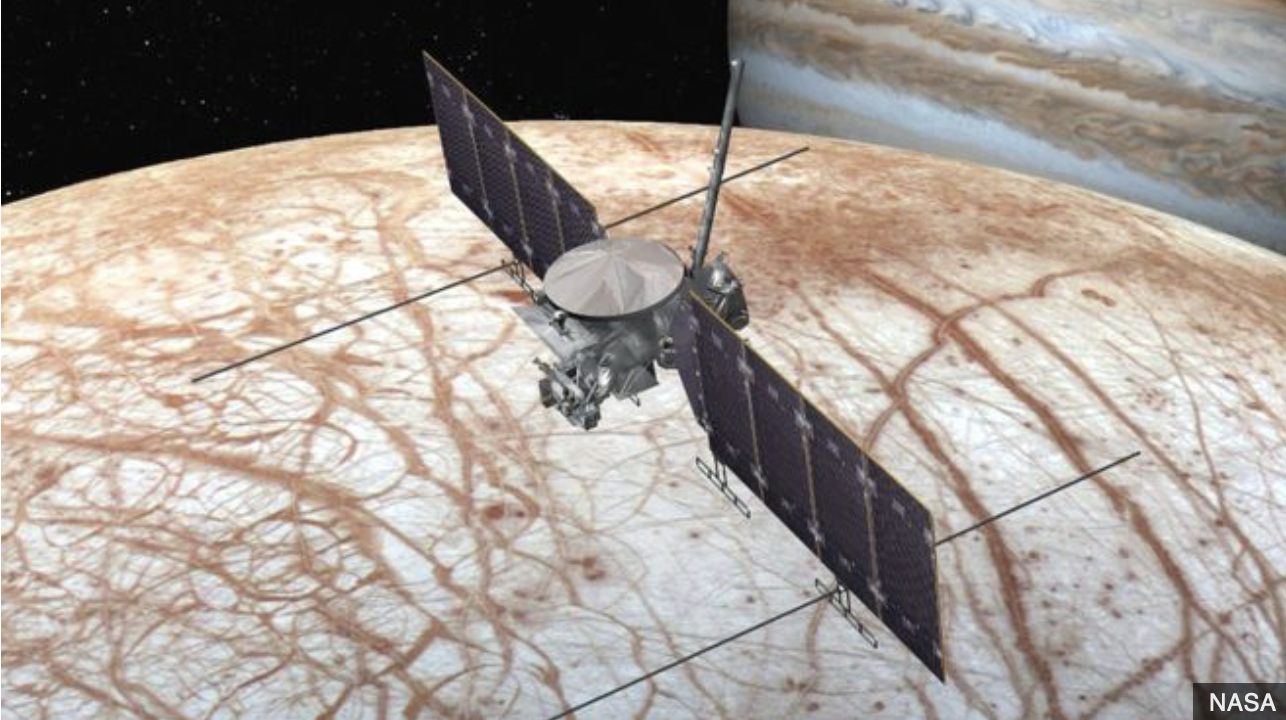 Artwork: Europa Clipper will try to determine whether the moon can support biology

Scientists working on an audacious mission to the ocean world of Europa can proceed with the final design and construction of the spacecraft, NASA says.

The Europa Clipper mission will target the ice-encrusted moon of Jupiter, which is considered a prime target in the search for life beyond Earth.

Below its icy shell, Europa is thought to hold a 170km-deep body of water.

This could have the right conditions for biology.

Due to launch in 2025, the Europa Clipper mission has now passed a stage called Key Decision Point C, a crucial marker on the road to the launch pad.

"We are all excited about the decision that moves the Europa Clipper mission one key step closer to unlocking the mysteries of this ocean world," said Thomas Zurbuchen, associate administrator for NASA's science mission directorate.

Europa Clipper will carry out an in-depth investigation of the watery world, including whether it can support life in its subsurface ocean.

Gravitational interactions with Jupiter generate tidal forces and heat, which keeps Europa's ocean liquid. The heating may even drive volcanic vents on the seafloor; on Earth, such vent systems support a wide array of life forms. 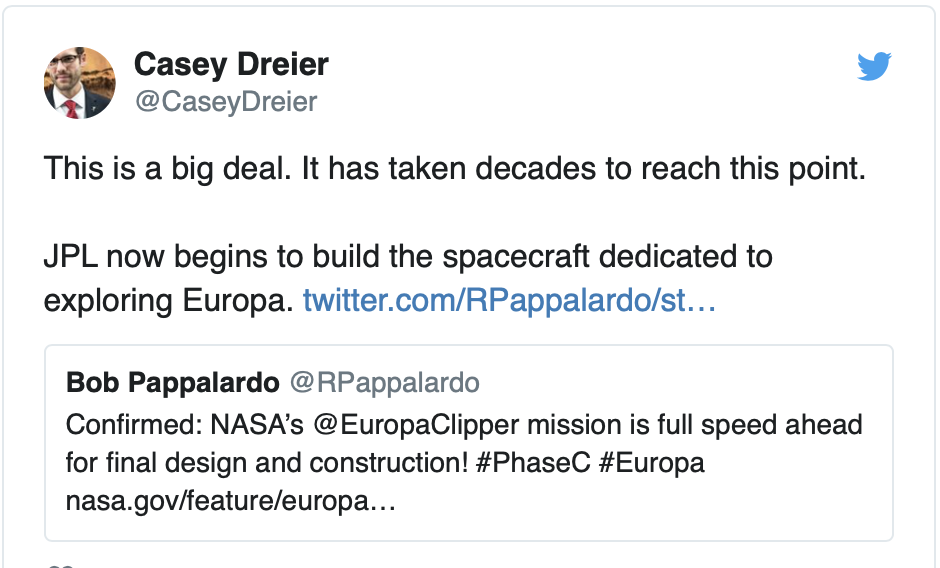 But it has taken decades to bring a dedicated mission this far, in part because of cost considerations and the challenges posed by the space environment around Jupiter.

Europa's orbital path takes it deep into belts of intense radiation that surround the giant planet. This radiation fries spacecraft electronics, which limits the durations of prospective missions to months or even weeks.

So rather than orbiting Europa, Clipper will make repeated close flybys of the moon, to reduce its exposure to the energetic particles trapped by Jupiter's magnetic field.

The spacecraft will carry nine science instruments, including cameras and spectrometers to produce high-resolution images of the moon's surface, a magnetometer to measure the strength and direction of its magnetic field (providing clues to the ocean's depth and salinity) and an ice-penetrating radar to determine the thickness of the icy crust above the ocean.

The ice shell could be tens of kilometres thick. Luckily, scientists think there are several ways for ocean water to get up to Europa's surface. In recent years, the Hubble Space Telescope has made tentative observations of plumes of water-ice erupting from beneath Europa, much as they do on Saturn's ice moon Enceladus, which also has a subsurface ocean. 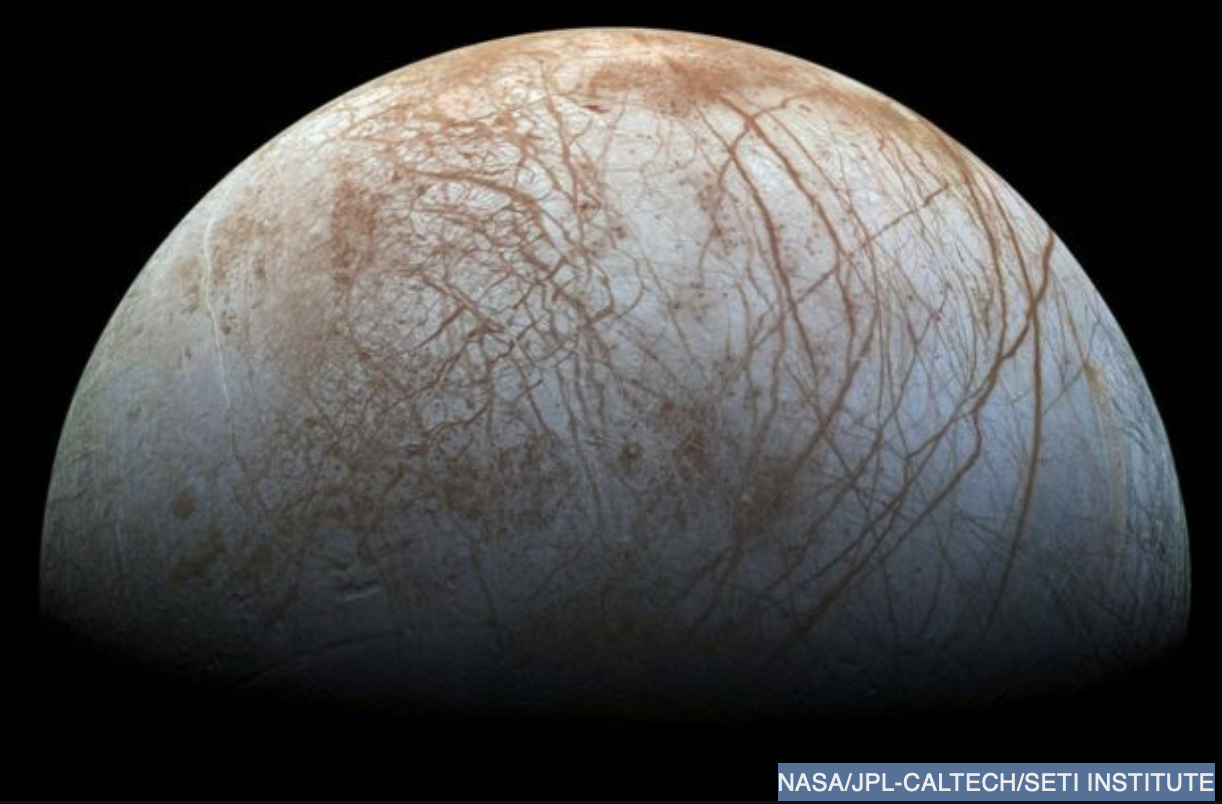 View of Europa taken in the 1990s by the Galileo spacecraft Europa holds a vast, salty ocean beneath its fractured ice shell

The first concepts for missions to explore Europa were drawn up in the 1990s, around the time that data from the Galileo spacecraft helped build evidence for a subsurface ocean. Since then, however, one proposal after another has been thwarted, including an ambitious US-European mission along the lines of the Cassini-Huygens mission.

But Clipper has had a key champion on Capitol Hill, in the form of Republican legislator John Culberson who, as chairman of the US House of Representatives appropriations committee that funds NASA, channelled money to the mission.

But last year, Culberson, who had become known for his advocacy on Europa exploration, was unseated in Texas' 7th congressional district by Democrat Lizzie Pannill Fletcher. During the campaign, a pro-Democrat political action committee ran an ad saying: "For Houston, Lizzie Fletcher will invest in humans, not aliens."

A follow-up mission to go and land on Europa has also been proposed. But the most recent federal budget request included no funding for the lander.