Three different perspectives in 360-degree virtual reality (VR) UHD of astronauts as they complete space-walk training for future missions to the International Space Station (ISS) are going to be demo'd by Harmonic (Nasdaq: HLIT) and NASA at the company's Stand 1.B20 at IBC2016.

The video for the VR demo was captured at NASA's Neutral Buoyancy Laboratory (NBL) in Houston, Texas. The NBL training facility features a large indoor pool of water with a life-size replica of the ISS, which is used by astronauts to perform simulated tasks in preparation for upcoming missions. This new NASA VR/360 video, and the NASA TV UHD channel, were created with Harmonic's end-to-end UHD video delivery solution. Powered by the Harmonic PURE Compression Engine™, the technology ensures superior video quality, up to 2160p60, at minimum bitrates. 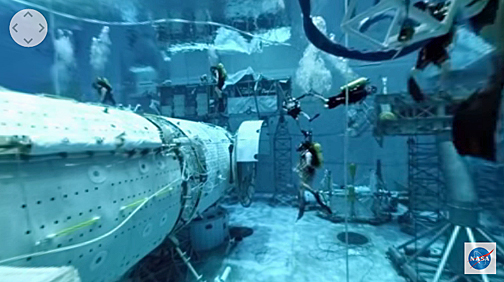 Through VR headsets, demo participants at IBC2016 will get an intimate, 360-degree look at the NASA astronauts in action. Harmonic will also be giving away VR headsets through daily drawings at the show.

According to Fred Brown, the executive producer of NASA Television, when NASA Television was created, an incredible opportunity was provided to the public via previously unseen footage of space exploration, training processes and live launches. Thanks to technology partners like Harmonic, NASA has been at the forefront of delivering amazing video experiences, including virtual reality and UHD."

The NASA VR/360 video is available on the NASA TV YouTube Channel at youtu.be/lil_I_-7aOM.