Statement from Maxar...1300-Class Communications Satellite Built for Intelsat Performing According to Plan After Launch

Maxar Technologies (NYSE:MAXR) (TSX:MAXR), a trusted partner and innovator in Earth Intelligence and Space Infrastructure, today announced that the high-power Intelsat 39 communications satellite, built for Intelsat, successfully launched today and is performing according to plan. 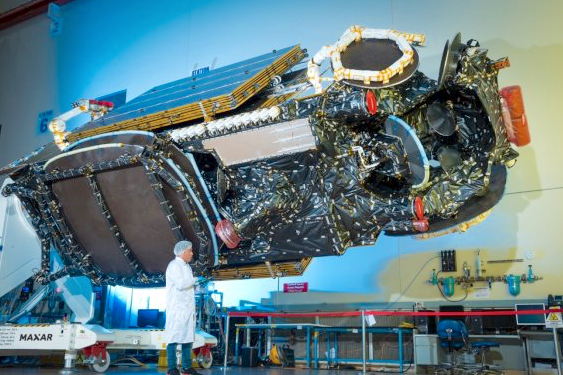 The Maxar-built Intelsat 39 communications satellite is performing according to plan after it’s launch. Image: Maxar

Intelsat 39 began receiving and sending signals following a launch aboard an Ariane 5 rocket from the Arianespace launch base in Kourou, French Guiana. Tomorrow, the satellite will begin firing its thrusters to propel toward its final orbit at 62 degrees East longitude. Once in service, Intelsat 39 will provide video distribution and broadband connectivity services across Africa, Asia, Europe and the Middle East. The satellite will also enhance mobile connectivity for aero, maritime and government users operating in the Indian Ocean region.

“Intelsat 39 replaces Intelsat 902, which was also built by Maxar and launched in 2001. By the time of its replacement, Intelsat 902 will have exceeded its expected 13-year design life by six years, or 45 percent – a strong testament to the reliability and on-orbit longevity of our 1300-class product line,” said Megan Fitzgerald, Maxar’s Senior Vice President and General Manager of Space Solutions. “Intelsat 39 is the 52nd satellite that Maxar has built for our long-term customer, Intelsat. I’d like to thank the team at Intelsat for their enduring partnership and commend them for their commitment to advancing the state of global communications.”

Intelsat 39 is equipped with both C-band and Ku-band transponders, and is based on Maxar’s decades-proven 1300-class platform, which offers high power, reliability and flexibility to support a broad range of applications and technology advances. The satellite will maintain its position using all-electric propulsion, which provides efficiency for satellite operators by reducing launch mass while increasing spacecraft flexibility and performance.

The operations of DigitalGlobe, SSL and Radiant Solutions were unified under the Maxar brand in February; MDA continues to operate as an independent business unit within the Maxar organization.