[SatNews] According to Euroconsult's newly released report, Satellite Communications & Broadcasting Markets Survey, Forecasts to 2024, the FSS industry posted an average annual growth rate of 4.3 percent over 2010-2013 with 2013 showing clear signs of slowdown at only +2 percent, the lowest growth rate since 2004. Further deceleration was witnessed in 2014, with sales remaining almost flat y-o-y at $12.3 billion. Note however that at constant exchange rates, industry revenue would have grown by 1.9 percent driven by the significant strengthening of the U.S. dollar vs. most currencies. 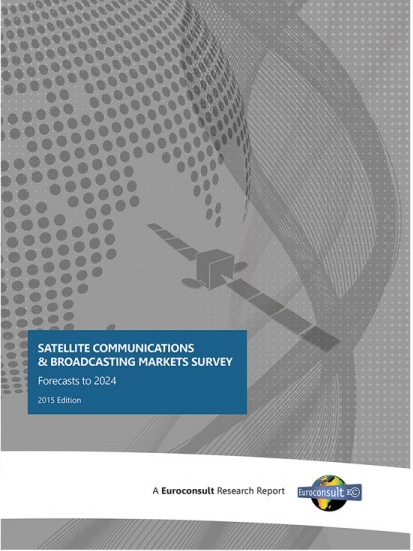 The FSS industry is currently in a transition phase. The overall direction is that of higher cost effectiveness of satellite infrastructure through larger payloads, lower launch costs and other cost optimization options (such as electric propulsion) offered by the recent streams of innovation. However, the impact on pricing has started to be felt, especially in data-driven markets, where pressure from high-throughput satellites and terrestrial networks is the highest. This might temporarily lead to lower operating margins and be the time for the industry to adapt to a new environment. The increasing competitiveness of satellite infrastructure, with HTS benefiting from a much lower break-even point than that of regular payloads, should allow operators to maintain decent return on investment, despite lower pricing.

While the market structure of the FSS industry remains concentrated with the top four operators generating 63 percent of industry revenues, it has become increasingly fragmented at the bottom. "Nine new operators have emerged over 2010-2014; within the next four years, 10 operators should enter the market by launching their first satellite," said Pacome Revillon, CEO of Euroconsult and editor of the report. "While privately-owned satellite start-ups try to ensure financing and the realization of their business plans through aggressive prelaunch purchase policies, nationally-owned operators have more secure future domestic business and less pressure on financial performance, since they are largely subsidized by their government shareholders."

While M&A activity picked up somewhat in 2013, it has been very limited since then. Despite some players ready to opt for external growth, opportunities are rather scarce and potential targets often ask for prices perceived as too high. With acquisitions difficult, partnerships and the sharing of satellites has become an increasingly attractive alternative for operators seeking to expand into new markets with limited associated costs and risks.

A new wave of major constellation announcements, with hundreds of satellites from new players in the sector, has recently increased interest in LEO constellations, both from the space community and investors. Examples include OneWeb planning to launch a LEO satellite constellation of 648 satellites; SpaceX announcing plans for a network of 4,000 satellites; and LeoSat, the third smallsat constellation announced since the beginning of 2015, planning for 80 to 120 satellites. While the success of these LEO constellations and the disruptive impact they could have on the industry are still hard to predict, the most recent successful innovations and already perceived impact on the FSS industry should not be overlooked, namely those of EO-HTS.

FSS industry revenues from regular bandwidth provisions are expected to grow at a CAGR of 1 percent over the next 10 years, reaching over $12.3 billion by 2024. This is a downward revision of our previous estimates, as we expect lower regular capacity requirements in most markets (except Latin America, Sub-Saharan Africa and South Asia) and increasing downward pressure on capacity prices. The market value of HTS capacity is expected to increase from around $900 million in 2014 to $4 billion by 2024, a significant downward revision compared to our prior estimate of $6.3 billion, with the main culprit being lower pricing. Significant overcapacity in some regions combined with the willingness of most operators to develop new services and the potential emergence of LEO constellations should lead to further pricing pressure.