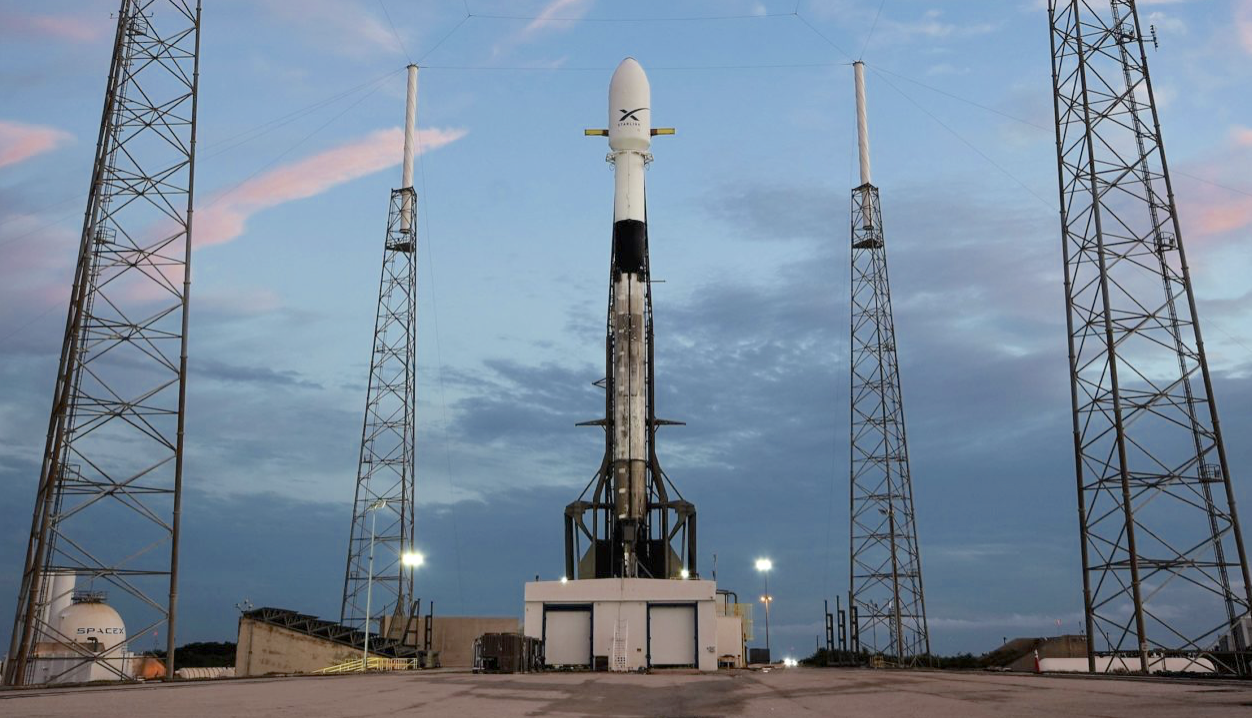 SpaceX CEO Elon Musk says the launch of 60 Starlink satellites is aimed at spreading “fundamental goodness” in the form of high-speed internet access for the billions of people who currently don’t have it.

The first full stack of Starlink satellites is packed in the nose cone of a SpaceX Falcon 9 rocket. Liftoff from Cape Canaveral Air Force Station in Florida was originally scheduled for Wednesday night [May 15], but had to be called off with less than 15 minutes left on the countdown clock due to unacceptable upper-level winds.

SpaceX announced another postponement today [May 16], and said the next launch opportunity would come next week:

At roughly 18.5 tons, the total payload mass for this launch will set a record for a SpaceX liftoff, Musk said during a pre-launch teleconference with reporters on Wednesday [May 15].

The first-stage booster for this launch was previously used for the Telstar 18 Vantage satellite launch last September and the Iridium 8 satellite launch in January. Minutes after launch, the booster is due to separate and land itself on a drone ship called “Of Course I Still Love You,” stationed in the Atlantic Ocean off the Florida coast.

Starting about an hour after launch, the 500-pound, flat-panel satellites will be spun into low Earth orbit like playing cards spread out on a table.

The satellites were built at SpaceX’s development facility in Redmond, Washington. Eventually, the Redmond factory could be turning out more than 1,000 satellites over the course of a year, Musk said.

“This was one of the hardest engineering projects I’ve ever seen done, and it’s been executed really well.” Musk said. “I think it is important to acknowledge that there is a lot of new technology here. So it’s possible that some of these satellites may not work. In fact, there’s a small possibility that all of the satellites will not work.” 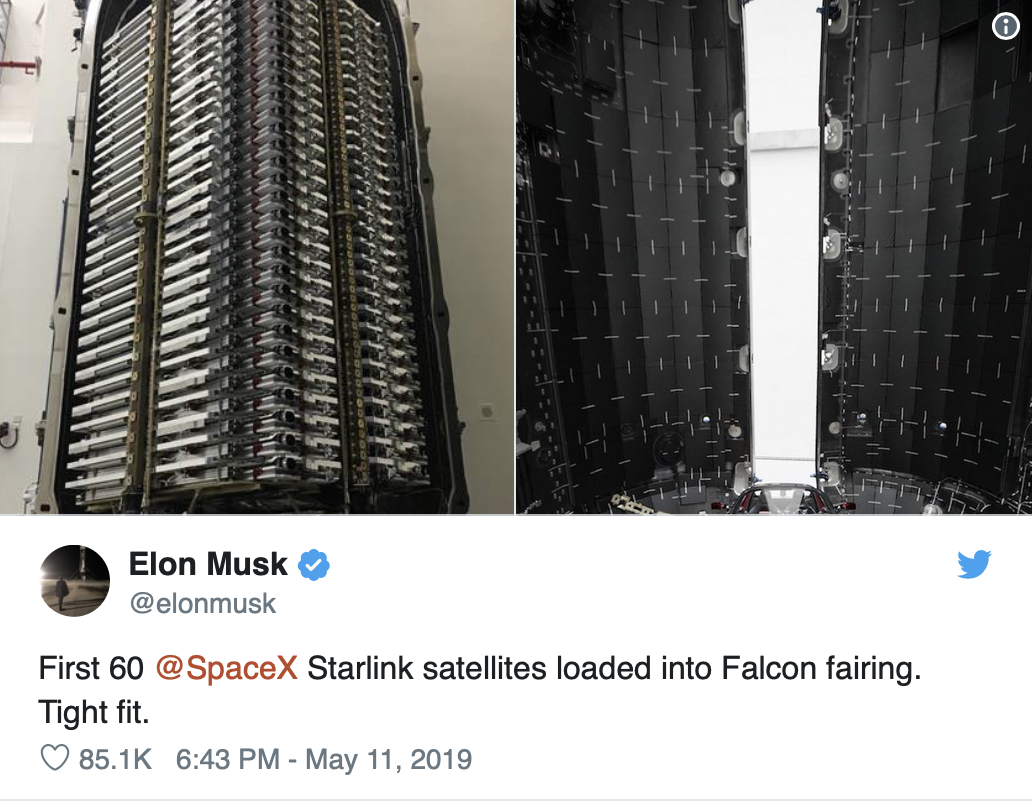 How five dozen satellites barely fit into a Falcon fairing.

The payoff? “The goal of the Starlink system is to provide high-bandwidth, low-latency connectivity, ideally throughout the world,” Musk said. Although he didn’t name a price, Musk said he expected Starlink eventually to “provide a competitive option” for the estimated 4 billion people around the world who can’t afford or can’t get access to broadband internet service.

“There’s a lot of, like, fundamental goodness about Starlink,” he said.

But there’s also, like, a revenue model: Musk estimated that once Starlink is fully up and running, it could generate $30 billion or more in annual revenue for SpaceX.

“We see this as a way forward to generate revenue that can be used to develop more advanced rockets and spaceships,” he said. “And that, we think, is a key steppingstone on the way toward establishing a self-sustaining city on Mars and a base on the moon.”

The income from Starlink is meant to help fund advanced development of Starship, the super-heavy-lift launch system that Musk intends to use to send a million settlers to Mars in the decades ahead. The first prototypes of the Starship system are already taking shape at SpaceX’s facilities in Texas and Florida.

There’s lots to be done before Musk’s city on Mars gets built. This first launch is primarily aimed at demonstrating the technology for what could eventually amount to as many as 11,000 satellites in low Earth orbit.

Musk said only about 400 satellites would be required to build up a “useful” satellite constellation, which translates into about six launches after this mission’s scheduled deployment. Mark Juncosa, vice president of vehicle engineering at SpaceX, said another six launches would provide good coverage over the United States. An additional six to 12 launches would raise the satellite tally high enough to cover the world.

“Within a year and a half, maybe two years, SpaceX will probably have more satellites in orbit than all other satellites combined,” Musk said.

More satellites will make for better service, but Musk said “one does not need anywhere around 10,000 satellites.” He said SpaceX cited the 11,000-satellite figure in its filings with the Federal Communications Commission just to set a maximum for the Starlink system.

SpaceX launched two prototype Starlink satellites in February 2018. Since then, there have been big changes in the design of the satellites — and in the leadership of SpaceX’s satellite team in Redmond.

Last month, SpaceX finally received FCC clearance for service using satellites that fly as low as 342 miles (550 kilometers), but the company will require additional sign-offs from international agencies for service outside the U.S.

Each satellite is equipped with a krypton ion drive for maneuvering in orbit, as well as phased-array antennas for transferring data to and from the ground. Musk said the signal latency would be less than 20 milliseconds, which compares favorably to cable connections.

These first satellites aren’t equipped with laser systems to communicate with each other in space. Instead, they’ll use a “ground bounce” trick to relay signals between satellites via SpaceX’s gateways. “It’ll be working pretty much like an intersat link,” Musk said. The lasers will come later.

Musk said each batch of 60 satellites represents about a terabit’s worth of useful connectivity — that is, a trillion bits of data. “If you add up all the solar panels on the system, it’s actually more solar power than the International Space Station,” he said.

The satellites will upload NORAD data about other objects in space, and tweak their trajectories accordingly to avoid orbital collisions. Their orbits are designed to maximize the chance that they’ll descend and burn themselves up at the end of their useful lives, with 5 percent or less of their mass surviving atmospheric re-entry.

On the ground, SpaceX plans to set up six satellite gateways, including installations in Redmond and North Bend, Wash. There’s also a telemetry, tracking and command station planned in Brewster, Wash.

SpaceX has also filed an application with the FCC to deploy up to a million user terminals. “What does the Starlink user terminal look like?” Musk said. “It basically looks like a small- to medium-sized pizza. It’s basically a flat disk, but unlike, say, a DirecTV satellite dish, which has to point in a specific direction … you can basically put it at almost any angle that is reasonably pointed at the sky.”

Musk said SpaceX hasn’t yet tried to sign up customers, but “we’re definitely interested in having those discussions.” Advance sales efforts, perhaps focusing on telecom partners, are likely to begin late this year or early next year, Musk said.

Starlink isn’t the only game in town: There are at least a half-dozen other ventures angling for a piece of the broadband constellation market, including OneWeb, Amazon, Telesat, LeoSat Enterprises, Boeing and Facebook.

Musk welcomes the competition. “My guess is there will probably be at least one other low-Earth-orbit constellation,” he said. But he’s trying to avoid obsessing over his rivals. For example, he declined one reporter’s invitation to comment on Amazon CEO Jeff Bezos’ plans for a satellite constellation known as Project Kuiper.

This report was originally published on May 15 and was updated with last week’s launch postponement.