The four Galileo satellites for Arianespace’s next Ariane 5 mission at the service of Europe’s navigation system are coming together in their flight configuration, while parallel preparations continue with the mission’s heavy-lift launcher. 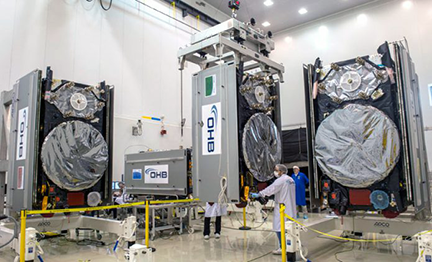 In the Spaceport’s S1A clean room facility, the four Galileo FOC satellites are prepared for their fit-check evaluation with the mission’s payload dispenser. Photo is courtesy of Arianespace.

During pre-flight activity in French Guiana at the Spaceport’s S1A processing facility, these FOC (Full Operational Capability) spacecraft have undergone their fit-checks with the dispenser system to be installed on Ariane 5. This dispenser system will secure the Galileo FOC satellites in place during their ascent to a targeted release altitude of 23,222 km., then deploy them in rapid sequence using a pyrotechnic separation system.

Designated as Flight VA244 in Arianespace’s numbering system, the July mission’s Ariane 5 is now at the Spaceport, positioning it for build-up in the Launcher Integration Building. After completion of verifications and systems checkout by production prime contractor ArianeGroup, this Ariane 5 ES version will be moved to the Spaceport’s Final Assembly Building for payload integration. 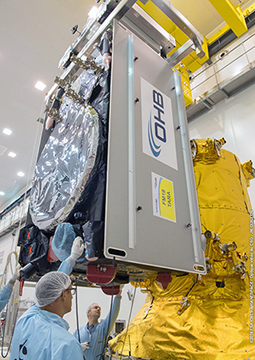 One of the four Galileo FOC spacecraft is shown during its fit-check process. Photo is courtesy of Arianespace.

The European GNSS Agency (GSA) is responsible for operating the Galileo satellite navigation systems on behalf of the European Union. Galileo spacecraft are built by OHB System in Bremen, Germany, and the navigation payloads provided by Airbus-owned Surrey Satellite Technology in the United Kingdom.

Flight VA244 is Arianespace’s third Ariane 5 mission carrying European Galileo satellites, following previous launches in November 2016 and December 2017. Prior to that, the company orbited 14 of them on seven Soyuz missions performed between October 2011 and May 2016.