Already Underway Thales Alenia Space's Facilities in Spain ... Construction and Completion in Less than a Year

Thales Alenia Space has already begun their new facilities in Spain for the integration of large satellite payloads and instruments, and anticipate the completion to occur as soon as in autumn 2020. In fact, the construction works will span for a little less than a year.

Once finished, the company will have the capacity to pursue high complexity activities such as the integration of the telecommunication payloads for Spain’s next generation governmental satellites SPAINSAT NG and other large systems in the field of Earth observation and science instruments.

The construction of the new clean room(1) that Thales Alenia Space, Joint Venture between Thales (67 percent) and Leonardo (33 percent) is setting up in Spain will become a reference for the integration and test of large space systems in Spain.

This investment will result into a unique, cutting-edge facility in Spain. The new clean room will add more than 600 m2 clean area to the existing 2000 m2. With a free height of 12.5 meters in the inside, the facility will be equipped with bridge cranes with lifting capacity up to 12 tons each, prepared for the integration of payloads and instruments of large dimensions for all type of space missions, spanning telecommunications, navigation, Earth observation and science.

Eduardo Bellido, CEO of Thales Alenia Space in Spain said that with these new capacities they are matching Europe’s space powers and they will be ready to pursue high level integration activities in Spain. They are currently leading the development of the telecommunication payloads for the SPAINSAT NG satellites in Spain, a state-of-the-art program in space technology, with these payloads to be integrated in the new clean room. Bellido added that this great investment shows the strong commitment of Thales Alenia Space in the development of high added value space activities in Spain. 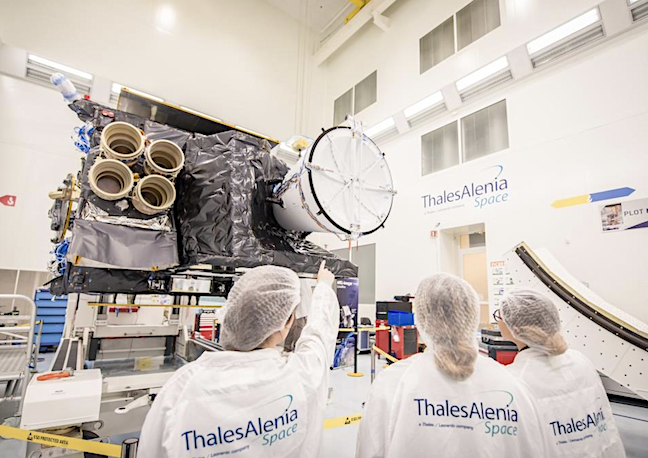 In 30 years of activity, Thales Alenia Space in Spain has participated already in 600 satellites, space vehicles and probes for space agencies and satellite operators all over the world, having built in its facilities in Madrid over 4000 equipment that feature over 200 million hours of operation in orbit.

Thales has specialized in the development of radiofrequency and digital electronics equipment and is a reference in Europe in satellite communication subsystems for all type of space missions and orbits, spanning Earth observation in low Earth orbit (LEO), meteorology missions in geostationary orbit (GEO) and science missions to the Moon and in orbit around the L2 Sun-Earth Lagrangian point at a distance of 1.5 million kilometers from the Earth. Over the last years it has delivered 30 large communication subsystems for several satellites, including Sentinel 1, 2 and 3, Ingenio, Meteosat Third Generation, GEO-KOMPSAT-2 and Euclid.

Thales Alenia Space site in Madrid is also a centre of excellence in optical Earth observation instruments. It is responsible for the development of the electronics for instruments such as OLCI (Sentinel 3), Ingenio and up to 12 high resolution optical satellites. Furthermore, it develops the video and data processing units for the two main instruments of Meteosat Third Generation, key to guarantee the superior image quality of both instruments.

The company is currently leading in Spain the study of the Land Surface Temperature Monitoring instrument (LSTM) for the expansion of the European environmental monitoring program Copernicus, a mission designed to provide seamless, accurate and easy to access information in support of agriculture and water resources management services, key to better addressing the nutritional needs of the world’s population over the next few decades.

(1) Clean rooms are areas designed and equipped to operate in very low contamination conditions and under stable temperature, air pressure and humidity conditions. They have a strict control of the environmental parameters (humidity, temperature, air pressure, dust particles suspended in the air) as well as stringent access and dressing restrictions. Class ISO 8 (or class 100,000), needed for the manufacturing and assembly of on-board satellite electronics and systems, guarantees that the number of particles >0.5 microns is below 3.5 million per cubic meter, or equivalently, 100,000 particles per cubic feet.