“Big, Fat, Juicy Targets”— The Problem with Existing Early-Warning Satellites. And a Solution. 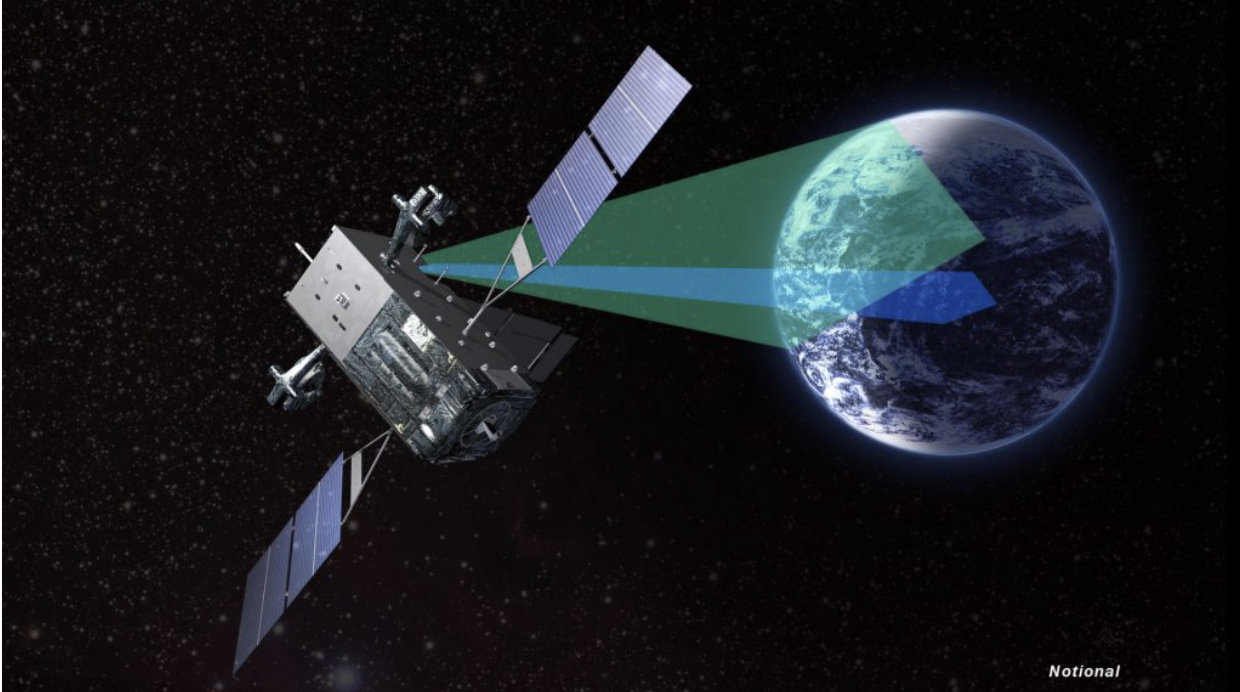 An artist rendering of a satellite in space. Image courtesy of US Air Force/Lockheed Martin.

In 2018, the US Air Force announced its intention to cancel the seventh and eighth space vehicles in the Space-Based Infrared System (SBIRS) program—a collection of satellites that provides early warning of incoming missiles—and declared its desire to transition over to the Next Generation Overhead Persistent Infrared program, which will serve the same purpose but which proponents say will be less expensive and more robust. Indeed, it was the escalating costs and vulnerability to countermeasures that seem to have motivated the decision to terminate the SBIRS program. In recent congressional testimony, Cristina Chaplain, the Government Accountability Office’s director for contracting and national security acquisitions, pointed outthat SBIRS was “exceedingly ambitious, which in turn increased technology, design, and engineering risks. While SBIRS and other satellite programs provide users with important and useful capabilities, their cost growth has significantly limited the department’s buying power at a time when more resources may be needed to protect space systems and recapitalize the space portfolio.”

What went wrong with the SBIRS program, and what advantages might the Next Generation satellites have? To answer those questions, we first have to be brought up to speed.

A little history. The SBIRS program was conceived as a two-tiered system to warn US leaders of incoming nuclear intercontinental ballistic missiles. The first tier, SBIRS High, was to include four satellites operating in geosynchronous orbit, situated above the equator and moving perfectly in synch with the rotation of the earth, and two satellites in highly elliptical orbits, giving them the ability to cover the higher latitudes of earth. For both sets of satellites, their primary mission was to detect and track missiles during their boost phase—that all-critical moment early in a missile’s flight just after lift-off, when it is slower, easier to track, most vulnerable to interception. The second tier, SBIRS Low, was to be comprised of a constellation of 24 satellites in low orbit to handle “the daunting job of distinguishing real warheads from decoys,” at a point in the missile’s trajectory known as “post-boost,” when the missile releases its payload and individual warheads begin on their separate trajectories—and consequently become much harder to deal with. As the program unfolded, SBIRS Low became too complex and costly to implement and was eventually cancelled.

The SBIRS program had many schedule delays and cost overruns. The launch of the first satellite was delayed by nine years, and the net cost grew to $19.9 billion, or 265 percent more than the initial estimate. One reason for these difficulties was repeated bureaucratic tweaking, with the consequence of conflicting requirements. Missile defense proponents wanted it “to provide quickerlaunch warnings, and to analyze missile trajectory and other factors to determine whether a rocket was carrying a benign satellite or a warhead.” Intelligence agencies required it to “provide data about activities on the ground, including rocket-engine tests.” And the Army wanted “information about Scud and other short-range missile launches during combat.” Of course, such “requirements creep” was not the only issue; SBIRS was also beset with contractor and congressional in-fighting. These myriad requirements drove the program in multiple directions without a clear and coherent agenda.

Can the Next Generation Overhead Persistent Infrared program avoid similar problems? The early debate offers hope that the program could be more streamlined. And there are also indications that it could capitalize on the advances made in recent years by the makers of small satellites that could reduce cost and decrease vulnerability. Indeed, a preliminary analysis reveals that small satellites can be useful in bolstering missile early-warning systems, but the United States must continue to experiment further.

Who’s in charge of national security in space? The requirements creep that afflicted the SBIRS program was caused by the absence of a single, overarching agency with sole responsibility for the program—echoing a problem that many space programs have encountered. In 2008, the congressionally mandated Allard Commission found that, when it comes to matters of space and national security, “no one’s in charge.” The commission report further noted that, “leadership for strategy, budgets, requirements, and acquisition across National Security Space is fragmented, resulting in an absence of clear accountability and authority.”

Various recent structural and policy changes have attempted to mitigate the lack of focused leadership. The Space Development Agency, for instance, was created precisely to address the aforementioned shortfalls. In the memo chartering its establishment, former acting Defense Secretary Patrick Shanahan wrote: “a national security space architecture that provides the persistent, resilient, global, low-latency surveillance needed to deter, or if deterrence fails, defeat adversary action is a prerequisite to maintain our long-term competitive advantage. We cannot achieve these goals, and we cannot match the pace our adversaries are setting, if we remain bound by legacy methods and culture.”

Similarly, Mike Griffin, undersecretary of defense for research and engineering, argued that while existing organizations such as the Space and Missile Systems Center in Los Angeles “have a very important function to oversee the legacy space architecture,” he insisted that, with respect to the establishment of the new agency, “what we’re doing is a new thing, to meet known mission requirements.”

The Space Development Agency is now responsible “for overall programmatic policy development and execution for next generation military spacecapabilities” and is expected to be deeply involved in the Next Generation Overhead Persistent Infrared program. The newly created agency, which is housed within the Pentagon, hopes to develop, among other things, a constellation of small satellites in low-earth orbit based on commercially produced designs “that would be more resilient to disruptions or attacks than traditional, larger and more expensive military spacecraft” traditionally used in mission such as missile early warning.

The SDA also has certain special acquisition and contracting authority that will “allow projects to move fast without getting bogged down in reviews and Pentagon bureaucracy.” The Air Force hopes that the newly empowered agency might help in “reducing the time to develop and field the first satellite” in the next generation program from nine years to five.

Small satellites and early warning. The emergence of new competitors and regional adversaries with advanced ballistic missile capabilities motivated a quick transition to the Next Generation Overhead Persistent Infrared program. A consensus has emerged in the US defense community that more varied and complex dangers exist to nuclear early-warning satellites than during the Cold War. One reason for this assessment is the increasing capabilities for anti-satellite attacks by Russia and China.

While much remains unknown about the specifications of the new system, a primary expectation is that it should be more survivable against emerging threats. In the memorable words of Gen. John Hyten, former head of US Strategic Command and now vice chairman of the Joint Chiefs of Staff, we should move away from procuring a handful of “exquisite” costly satellites that make for “large, big, fat, juicy targets.” Instead of these “fragile, undefendable” devices, he advocated in favor of “more resilient, more distributed capabilities,” such as cheaper, small satellites. A constellation of such small satellites is likely to enable both greater dispersion of our space assets, and the ability to rapidly recover in the event of an attack.

But will small-satellite constellations be able to provide effective early warning of incoming missiles? If so, how many will be needed to replace the coverage provided by one traditional satellite situated in geosynchronous orbit? There is some evidence that small satellites in low-earth orbit could at least provide some capabilities. In 2001, SBIRS Low was taken over by the Missile Defense Agency and repurposed as an experimental program—the Space Tracking and Surveillance System—to evaluate the capability of small satellites to provide early warning of an incoming missile attack. During the test phase, two low-earth orbit Space Tracking and Surveillance System satellites “tracked multiple missiles in the early boost and post-boost phases”—providing proof of concept.

A preliminary technical simulation further supports the idea that satellites like those of the Space Tracking and Surveillance System could provide reasonable ballistic missile early warning. Using the country of China as an example, the figure below shows the number of minutes of coverage a single small satellite could provide over that country for such a task. Most Chinese silo-based intercontinental ballistic missiles are located in a band between 25 degrees and 35 degrees north latitude. Therefore, the satellite could be inclined at an angle of 30 degrees to maximize coverage over the latitude band. The figure shows a range of possibilities based on satellite altitude and various sensor limitations. Assuming a capability akin to that of the Space Tracking and Surveillance System, a single small satellite operating at an altitude of 1,350 kilometers and with a horizon field-of-regard (that is, with a wide-angle sensor that can see from horizon to horizon) would provide approximately 140 minutes of daily coverage. Thus, continuous monitoring for ballistic missile launches from China would require only about 10 satellites. 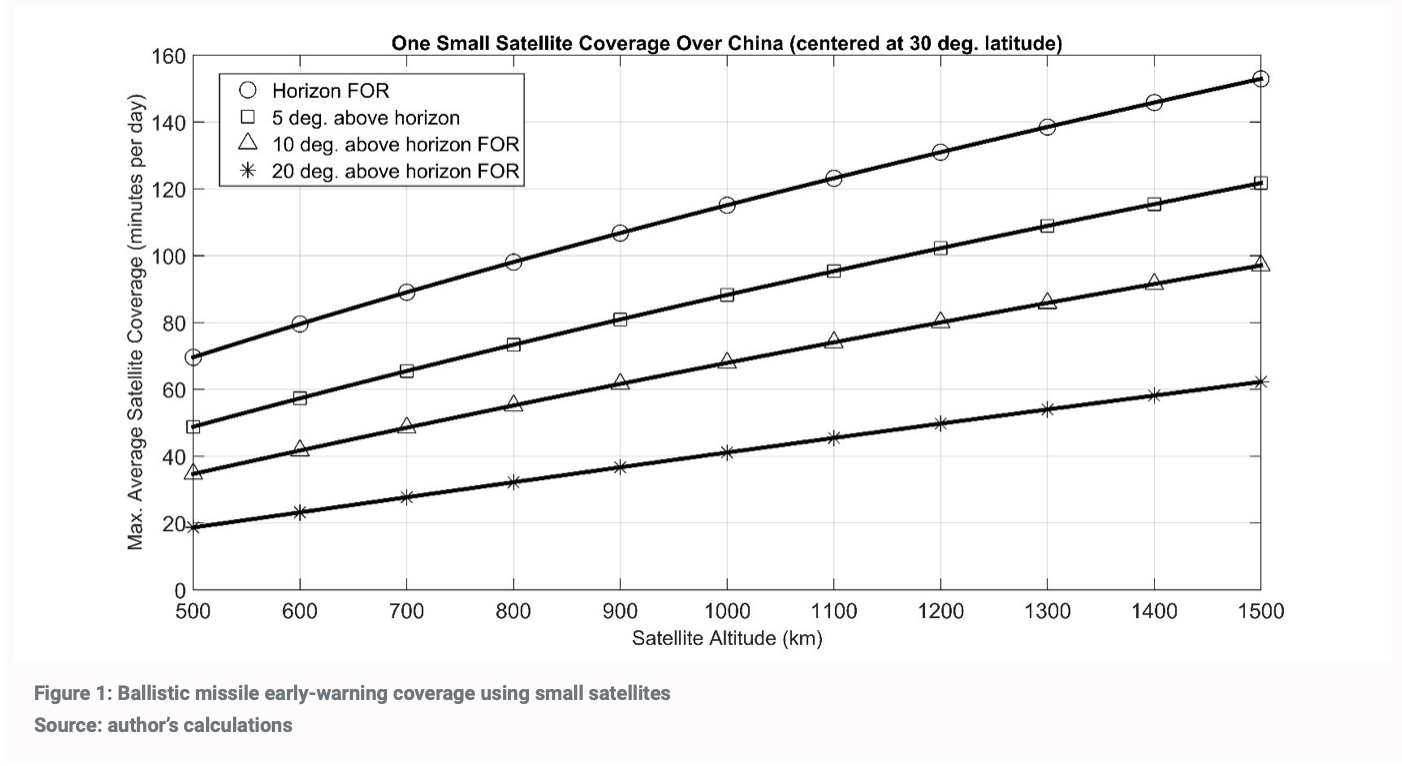 Operating at an altitude of 1,350 kilometers, however, may require satellites to be hardened against radiation from the Van Allen belt—the zone of tiny, magnetically charged particles that hover around earth and are held there by its magnetic field. It may also require very large rockets, in the form of heavy-lift space launch vehicles. Both requirements tend to increase the cost. Reducing the satellite altitude to 500 kilometers would limit the need for radiation hardening and heavy-lift launch. If the altitude is set at 500 kilometers with a horizon field-of-regard, a single satellite would provide approximately 70 minutes of daily monitoring over China. Consequently, to secure round-the-clock ballistic missile early warning at this altitude for the country of China alone, a total of around 20 satellites would be needed.

This preliminary analysis shows that it may be possible to use small satellites to provide ballistic missile early warning, particularly if these satellites could be developed at the same low costs of other small satellites. Overall, an auxiliary small-satellite constellation operating in tandem with other traditional early-warning satellites would certainly complicate an adversary’s attempt to blind the United States, offering redundancy and the ability to reconstitute a constellation quickly in a contingency.

The time to experiment is now. The small-satellite revolution and its successes offer many possibilities for imitation. Still, the technology gains made by the commercial small-satellite industry need to be carefully examined further before presuming that these advances can be scaled up to replace traditional national defense mission satellites. Small satellites have several limitations. They are constrained not only in terms of complexity or number of instruments that can be placed on a satellite, but also as regards their orbit lifetime, power generation and storage, data transmission rate, and platform stability. Given these limitations, the value of small satellites might lie in performing niche aspects of missile early warning, particularly during a contingency when traditional satellite capabilities have been compromised.

The early phases of the Next Generation Overhead Persistent Infrared program may provide a narrow time window to test whether small satellites can provide limited but relevant capabilities for missile early warning. While the United States’ adversaries are acquiring anti-satellite and other denial capabilities, the present threat should not be overstated. In an interview, Gen. Hyten said that “because of the vast amount that we’ve invested over the years, our overhead architectures are well beyond anything our adversaries can counter.” He also said it would be a mistake to “think that we are vulnerable today and that our entire overhead architecture can somehow disappear tomorrow.” Experimenting now, while the threat is limited, may help us to understand both the benefits and limits of small satellites, and develop the proper balance between traditional and small satellites to ensure the stability of nuclear deterrence.

By Jaganath Sankaran, From TheBulletin