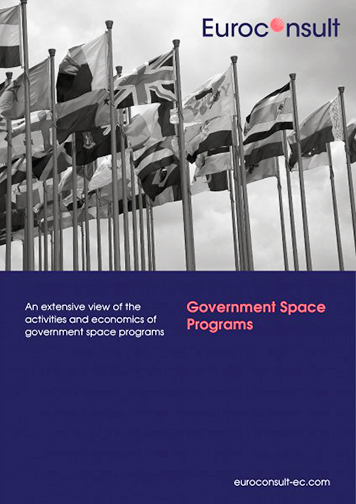 According to Euroconsult's newly released research, Government Space Programs: Benchmarks, Profiles & Forecasts to 2028, global government space budgets are in the early stages of a ten year growth cycle with total world expenditures reaching $70.9 billion in 2018 and are forecast to grow to $84.6 billion by 2025.

The report provides important detail on how much investment is expected by region with profiles of space programs in 86 countries. It includes analysis of seven different application areas for each country including Earth Observation, satellite navigation, space science and exploration, space security, communications, launch vehicles and manned spaceflight.

According to the research, the U.S. government continues to be the world’s largest investor in space programs, with China, Russia, France and Japan following in that order. The U.S. budget for space in 2018 totaled $40.9 billion, 58 percent of the world market, down from 75 percent of the world market in the early 2000s. China solidified its second-place ranking, with an estimated $5.83 billion budget, as it looks to commercialize and internationalize its space sector. Russia’s budget has decreased from its highs in 2013 and France tops European national spending and has overtaken Japan with the fourth largest government space budget in 2018.

Among other interesting findings, the research shows that growth drivers are reversing from the recent past, with defense budgets now expected to outpace civil budget expansion. The report shows that civil budgets worldwide will grow moderately at an average of 1.6 percent per year throughout the 2020s, driven largely by leading powers investing in science, exploration and manned flight. However, short-term budget growth will be fueled by defense programs in the U.S., Asia and the Middle East with an average of 4.2 percent annual increases until the mid-2020s.

With data on the period from 2009-2018 for historical trends and 2019-2028 for forecasts, Government Space Programs: Benchmarks, Profiles & Forecasts to 2028 is a unique resource to assess both current and future trends with deep insight into what is driving market changes.

Steve Bochinger, COO of Euroconsult, said that to support strategic planning initiatives, governments, companies and investors look to Euroconsult research for unbiased analysis of the markets that interest their stakeholders.

Simon Seminari, Senior Consultant and Editor in Chief of this research, added that Euroconsult's Government Space Programs research provides key evidence of the large and growing opportunities for leading and emerging space countries around the world with both concise summaries and in-depth focus.