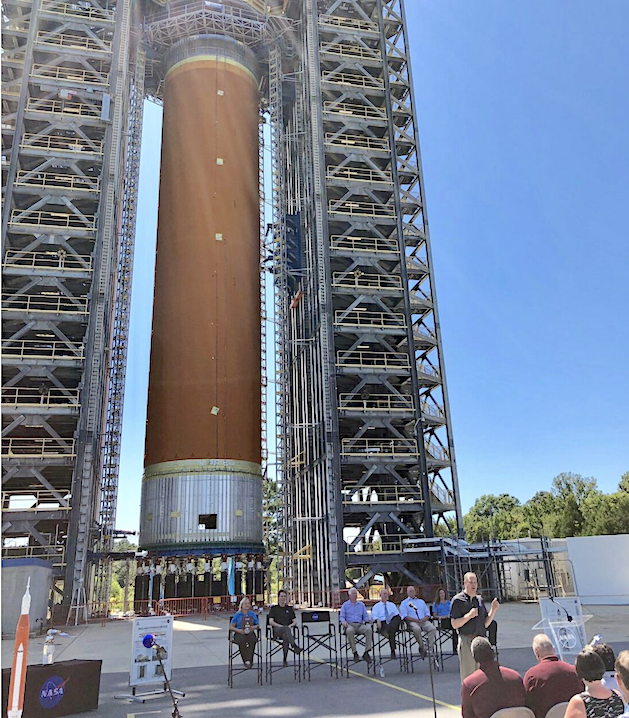 NASA Administrator Jim Bridenstine announced today that Marshall Space Flight Center in Alabama will take the lead role in developing the vehicles for landing astronauts on the moon — which could be good news for Amazon CEO Jeff Bezos’ Blue Origin space venture, but definitely came as bad news for Texas lawmakers.

To be fair, Texas is getting a piece of the action in NASA’s Artemis moon program as well: NASA’s Johnson Space Center in Houston will continue to take the lead role in human spaceflight – and in the development of the ascent module for the human landing system.

The latest step in NASA’s Artemis plan for sending astronauts to the moon within five years came during a ceremony at Marshall Space Flight Center in Huntsville, Ala., staged in front of a 149-foot-tall structural test model for NASA’s heavy-lift Space Launch System rocket.

Bridenstine said the moon lander program would bring 140 jobs to Marshall and 87 jobs to Johnson, with another 136 distributed among other NASA centers. “We focus on a ‘One NASA’ integrated approach that uses the technical capabilities of many centers,” he said.

Despite Bridenstine’s reassurances, Texan members of Congress said they were disappointed by the decision, and complained that NASA officials hadn’t told them about Alabama’s elevated role until reports started appearing in news outlets such as Ars Technica.

U.S. Rep. Brian Babin, R-Texas, the ranking GOP member of the House Space Subcommittee, was a no-show at today’s ceremony and joined Texas’ GOP senators – Ted Cruz and John Cornyn – in calling for the decision to be reconsidered. 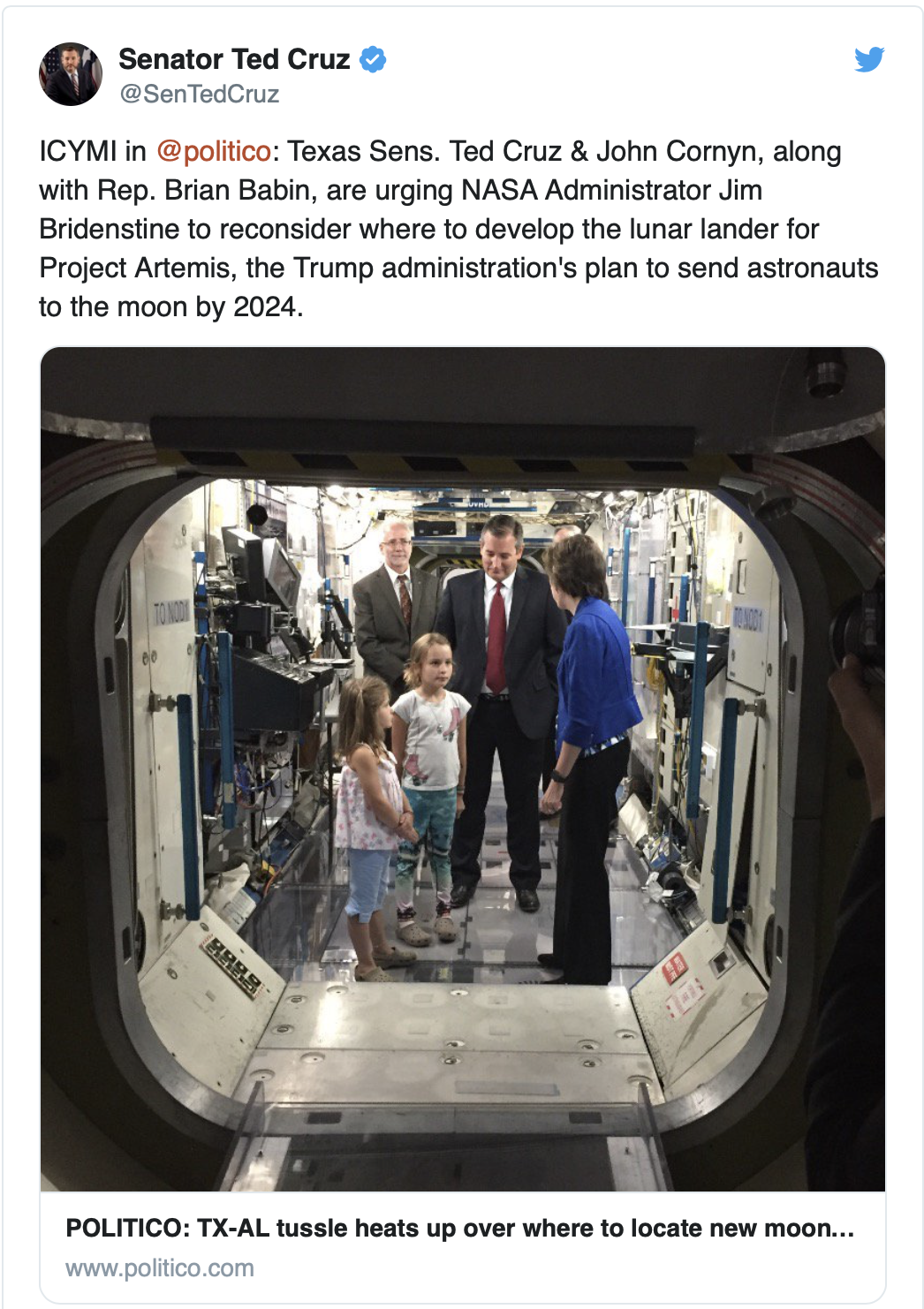 “Marshall Space Flight Center does tremendous work for our nation’s space program, but the knowledge base and skill set for this task unquestionably resides at JSC where the Apollo lunar lander program was successfully managed,” Babin said in a statement.

Cruz, who chairs the Senate Space Subcommittee, also said Johnson should have the lead role for the lunar lander. “I will use every tool at my disposal to ensure the Johnson Space Center remains the crown jewel in human space exploration,” he said in a statement.

Marshall’s role will focus specifically on the transfer vehicle that would ferry astronauts and cargo shipments from a lunar-orbiting Gateway platform to low lunar orbit, plus the heavy-duty descent module that would carry them the rest of the way to the moon’s surface. The ascent module, where the astronauts would ride, falls under Johnson Space Center’s purview.

NASA’s Alabama center has played a role in rocket propulsion since the space agency’s early days, thanks in part to pioneer rocket scientist Wernher von Braun and his team.

“Marshall Space Flight Center is the birthplace of America’s space program,” U.S. Rep. Mo Brooks, R-Ala., said at the Huntsville ceremony. “It was Marshall scientists and engineers who designed, built, tested, and helped launch the giant Saturn V rocket that carried astronauts on the Apollo missions to the moon.”

The space shuttle’s propulsion system also was developed at Marshall, and the center has the lead role in managing the Space Launch System development effort.

Marshall has a powerful advocate in Sen. Richard Shelby, R-Ala., who has ensured that NASA continues to support the SLS program even as SpaceX and Blue Origin work on their own heavy-lift rockets. 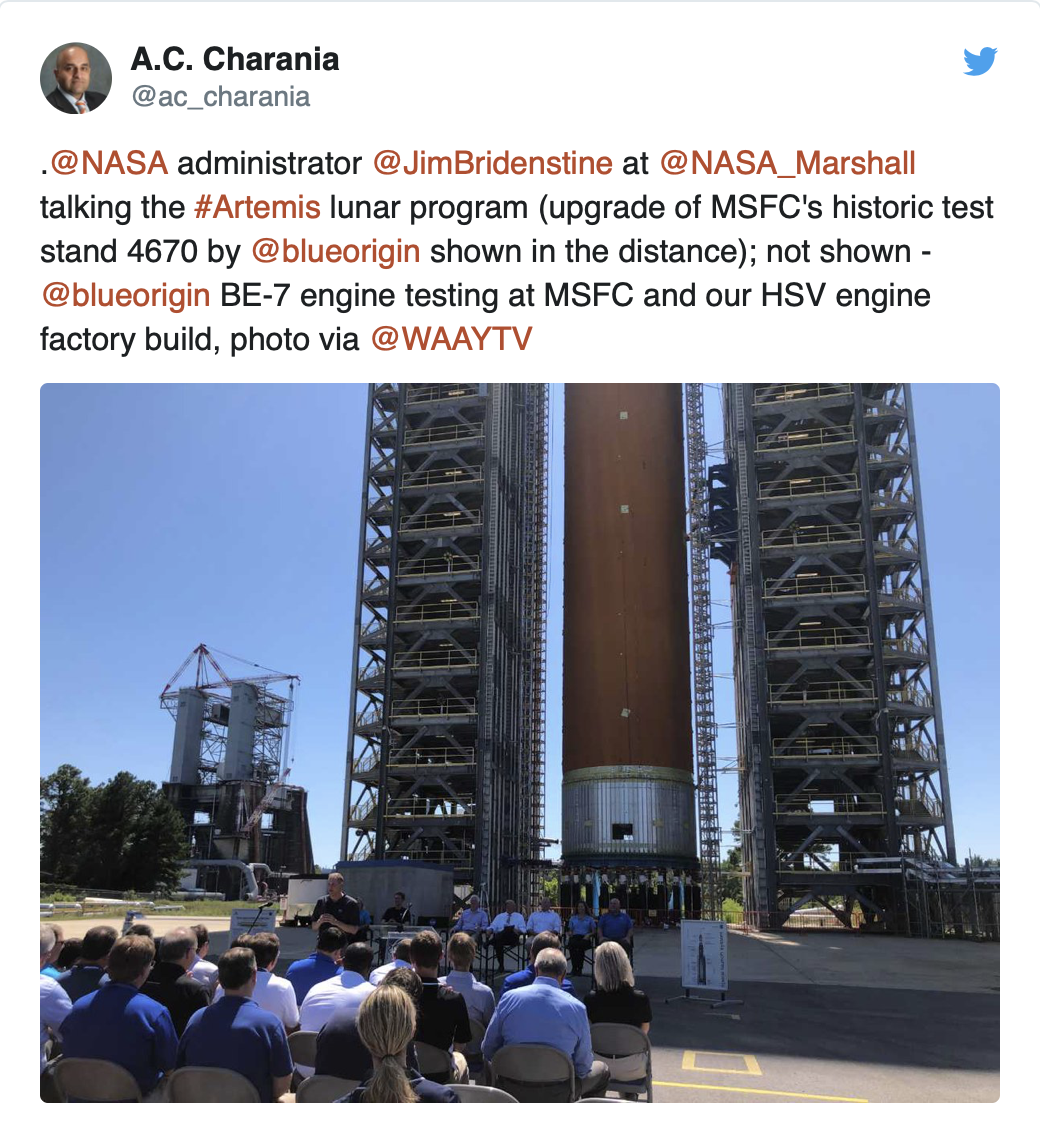 Turning the moon lander program into a Texas vs. Alabama political issue runs the risk of eroding support for NASA’s Artemis plans, which are already facing questions about cost from leading House Democrats.

Blue Origin may be headquartered in Kent, Washington, but it has several connections to Marshall and the Huntsville area: It’s building a $200 million factory in Huntsville, Alabama, to produce BE-4 rocket engines for its orbital-class New Glenn rocket. It also has an agreement with NASA to use an updated Apollo-era rocket engine test stand on Marshall’s grounds.

Even more relevant to the latest announcement, Blue Origin is using Marshall as the test center for its new hydrogen-fueled BE-7 engine, which would power its Blue Moon lunar lander.

Blue Origin’s director of business development, A.C. Charania, made note of the Alabama connections today in a tweet:

Blue Origin is putting a lot of effort into laying the groundwork for future lunar landings: It’s among 11 companies working on risk-reduction studies for future landers. It’s also among 13 companies collaborating with Marshall and other NASA centers on lander technologies.

NASA is expected to start awarding contracts for work on crew-capable lunar landing systems by the end of the year. Having connections to the lead NASA center for lunar lander development doesn’t guarantee that Blue Origin’s Blue Moon concept will win NASA’s nod. But it doesn’t hurt. By Alan Boyle, Geekwire