SpaceX Launches NEXT 10 Iridium Satellites ... Only One More Launch to Go

Lifting off from Vandenberg Air Force Base in California, this was the seventh of eight launches planned for the Iridium NEXT constellation, replacing the company's existing 66 satellite network. Only one more launch of 10 satellites remains until the Iridium NEXT network is completed, ushering in a new era of capabilities, like the Iridium CertusSM broadband service and AireonSM real-time aircraft surveillance system. 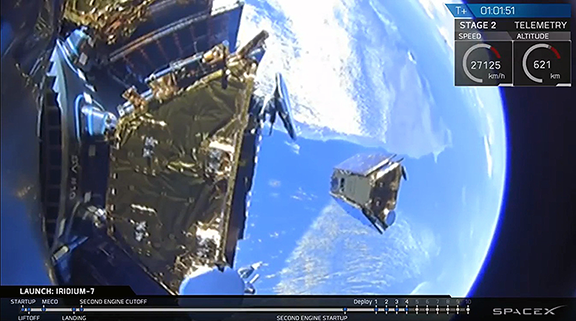 The deployment of the 10 Iridium NEXT satellites underway.
Photo is courtesy of SpaceX.

According to the company, completion of Iridium NEXT will spark both a technological and financial transformation for the company, while providing its partner ecosystem with an unrivaled industry platform for innovation. The Iridium partner ecosystem, consisting of hundreds of companies, plays an invaluable role in the creation, distribution and servicing of Iridium equipment, airtime and applications.  Among the new services, Iridium Certus will provide the fastest L-band broadband service globally, turbocharging Iridium satellite connectivity using smaller and more cost-effective terminals.

Five companies have been selected by Iridium as Value Added Manufacturers (VAM) for Iridium Certus, including Thales, Cobham, Rockwell Collins, L3 Communications and, most recently, Gogo.  This group of companies has been joined by more than twenty Iridium Certus service providers who will be providing the service for maritime, aviation, Internet of Things, land-mobile and government-related industries. 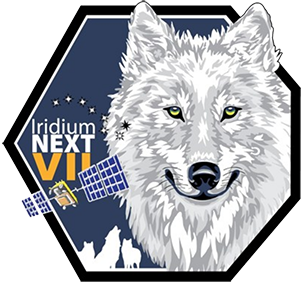 The 10 Iridium NEXT satellites launched as part of the seventh mission were delivered to orbital plane number five, where they will go in to operation immediately following testing and validation. The Iridium network is comprised of six polar orbiting planes, each containing 11 crosslinked satellites for a total of 66 in the operational constellation.  Upon activation of all 10 new satellites, orbital plane five will become the fourth Iridium orbital plane to be comprised exclusively of Iridium NEXT satellites.  In total, 81 satellites are being built with 75 planned for launch. Nine of the satellites launched will serve as on-orbit spares, and the remaining six will be ground spares.

Matt Desch, the CEO at Iridium, said that this historic constellation refresh is one launch away from completion, a launch that will bring the full power of the Iridium NEXT constellation to life. The company has come a long way, and Iridium is particularly excited to see the financial transformation enabled by the completion of the Iridium NEXT system and the associated drop in capital expenditures.