Journalist Chris Forrester at the Advanced Television infosite is reporting that Turksat officials, speaking at the Washington DC trade show this week, said that their latest satellite — Turksat 5A — will be orbited next year and no later than Q2, although that is a few months later than had been originally expected. 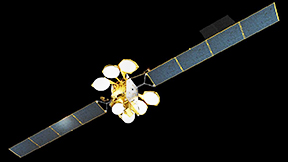 Artistic rendition of the Turksat-5A satellite.

The satellite is under construction by Airbus Defense & Space and will be launched by SpaceX.

Türksat 5A is a DTH and broadcasting satellite which will operate in Ku-band from 31 degrees East and reaching Turkey, the MENA region and large regions of Africa. It will provide television services and improve broadband data services.