Among the many announcements emanating from the 2019 Small Satellite Conference at Logan, Utah, Arianespace introduced an innovative service providing fast-track access to Geosynchronous Equatorial Orbit (also known as geostationary orbit, or GEO) for the new generation of small satellites, offering a first flight opportunity with more than 4,500 kg. of such payloads on its “GO-1” mission in the first half of 2022. 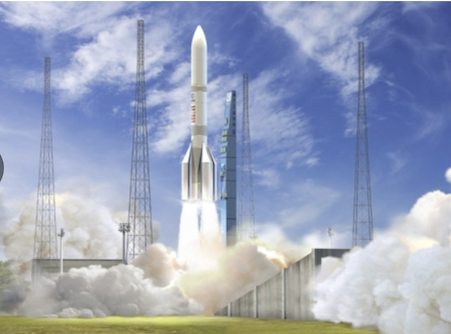 Ariane 64: Europe’s Next Heavylifter Designed to replace the workhorse Ariane 5 ECA, Ariane 6 will launch in two configurations. Equipped with four solid-rocket boosters, the Ariane 64 will lift 10,500 kg (23,150 lb.) to geostationary transfer orbit (GTO) with 1,500 tons of thrust at liftoff. In its Ariane 62 configuration, the rocket will use two boosters to carry half that weight to GTO with 800 tons of thrust. Photo: ASL

Customers taking advantage of the GO-1 mission will benefit from a short ride to orbit: from liftoff to separation, the duration will be shorter than commercial jetliner flight from New York to Paris. The new service also will involve user-friendly launch service agreements and simplified mission preparation procedures. As close to six months before liftoff, customers will be able to purchase one or several slots on the GO-1 mission.

This rideshare flight from the Guiana Space Center announced during the 2019 Small Satellite Conference at Logan, Utah, will use the Ariane 64 version of Europe’s future heavy-lift launcher. The GO-1 mission will inaugurate a regular, frequent path to direct geostationary orbit for small satellites. Configured with the Multi-Launch Service carrying system (MLS), Ariane 6 can accommodate a full range of small-sized satellites, from cubesats to microsats or larger.

Arianespace CEO Stéphane Israël said that this is a new day for small satellites: until now, there has been no convenient, predictable, affordable path to GEO for small satellites. But with the Ariane 64 coming online and the GO-1 mission, they’ve engineered a solution that will pave the way for a smallsat revolution in geostationary orbit. While most of such launches depend on a lead customer who could delay the flight, the GO-1 mission will follow a specific schedule — offering to each customer and to each satellite a ‘place of honor’ aboard this flight, which will lift off once the targeted payload capacity is booked.