Eutelsat Communications (Euronext Paris: ETL) has signed a letter of agreement with Thales Alenia Space for the procurement of EUTELSAT 10B, a new all-electric satellite built on the Spacebus NEO platform.

Scheduled to be launched in 2022, the satellite will be located at 10 degrees East, an orbital position that offers visibility spanning from the Americas to Asia. The satellite will ensure service continuity for existing customers on EUTELSAT 10A, while supporting the development of the Group’s activities in mobile connectivity thanks to two new incremental HTS payloads.

Responding to strong growth in demand for mobile connectivity, EUTELSAT 10B will carry two, multi-beam, HTS Ku-band payloads: a high-capacity payload, covering the North Atlantic corridor, Europe, the Mediterranean basin and the Middle East, offering significant throughput in the busiest air and sea traffic zones, and a second payload to extend coverage across the Atlantic Ocean, Africa and the Indian Ocean. The satellite’s HTS payloads will be able to process more than 50 GHz of bandwidth, offering a throughput of approximately 35 Gbps. The entire satellite payload will be digitally processed, offering capacity allocation flexibility thanks to a digital transparent processor. 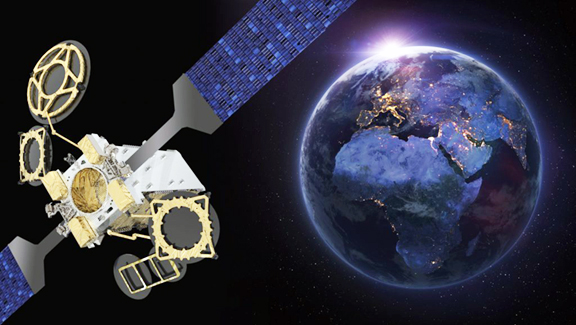 The 10 degrees East location that EUTELSAT 10B will occupy has been operated by Eutelsat since 1987 and provides coverage in the heart of the European, Middle Eastern and African zones. EUTELSAT 10B satellite will carry two widebeam C- and Ku-band payloads, totalling 32 36 MHz equivalent transponders1 to ensure continuity of the missions of the EUTELSAT 10A satellite, whose operational life is scheduled to end in 2023.

The capital expenditure represented by EUTELSAT 10B does not alter Eutelsat’s existing envelope of 400 million euros per annum on average for the period from July 2019 to June 2022.

Rodolphe Belmer, CEO of Eutelsat, said, "The procurement of EUTELSAT 10B underpins our strategy of focusing our development in the field of connectivity. The selection of its Ku-band payload, in complement to the future KONNECT VHTS operating in Ka-band, reflects our ability to serve our customers in both Ka- and Ku-band with best-in-class space assets. Firm capacity commitments secured with major partners testify to both the quality of coverage at our 10 degrees East location as well as the robustness of demand in the mobile connectivity segment.”