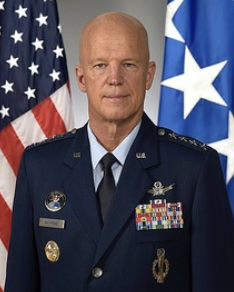 Raymond assumed the duties of the first head of the Space Force on December 20, 2019, when U.S. President Donald Trump signed into law the National Defense Authorization Act that officially launched the new force.

"The Space Force will help us deter aggression and control the ultimate high ground," Trump said at the NDAA signing last month.

Raymond was named commander of the new United States Space Command upon its creation in August of last year. That command, which sought to better organize the U.S. military's space assets and operations, is being phased out as personnel are transferred to the Space Force.

The military's role in space has come under scrutiny because the U.S. is increasingly reliant on orbiting satellites that are difficult to protect. Satellites provide communications, navigation, intelligence and other services vital to the military and the national economy.

Officials have said the Space Force will initially include thousands of Air Force service members and civilian personnel currently serving within the Air Force's Space Command.

Personnel from the Army and Navy's space programs also are eventually expected to be integrated into the new service branch.