Kleos Space S.A (ASX:KSS, Frankfurt:KS1) has received confirmation that their Kleos Scouting Mission1 will launch via a PSLV rocket from Chennai, India, in December of 2019.

Kleos’ cluster of four satellites are confirmed as mission-ready for PSLV integration. Technical efforts have ensured the satellites will function with the dispensers for the PSLV rocket. The satellites have passed a deployer fit check which confirms the satellites conform to the PSLV requirements. 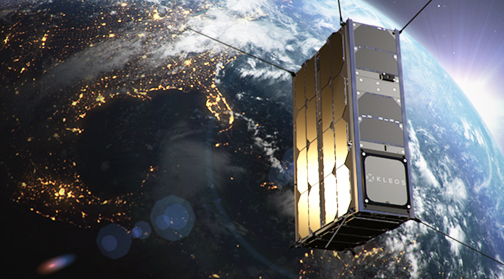 The Scouting Mission satellites will launch from the Satish Dhawan Space Centre aboard PSLV C49 (a rideshare launch including satellites from other organizations, such as Spire Global) into a 37 degree inclination to deliver optimized revisit rates over crucial shipping regions that include the Strait of Hormuz, South China Sea and East and West African coasts as compared to the original SSO.

Photo is
courtesy of ISRO.

The four-week launch preparation schedule will commence in mid-November with shipping of high purity butane satellite fuel to the launch integration facility in Chennai. While launch preparations are underway, Kleos remains focused on securing additional Government and commercial pre-order contracts and is on track to achieve first revenues in Q1 2020.

The development of Kleos’ second cluster of satellites, which will enhance data collection and increase revenues and customers, is progressing. Kleos’ Scouting Mission satellites will geolocate maritime radio frequency transmissions to provide global activity-based intelligence irrespective of the presence of AIS (Automatic Identification Systems) or any other positioning system, or when imagery is unclear and targets are out of maritime patrol range. The geolocation data will enable governments and organisations to detect hidden maritime activity such as drug and people smuggling, piracy and illegal fishing as well as identify those in need of search and rescue at sea.

Kleos CEO Andy Bowyer said that satellite launches are highly complex, requiring extensive pre-flight testing of critical functions that cannot be fast-tracked without compromising the mission. The company's Scouting Mission satellites are mission-ready, forming the foundation of future constellations. When they launch in December, Kleos is on track to generate the firm's first revenues in Q1 of 2020."

1The scouting mission is comprised of 4x smallsats built by GomSpace in Denmark.