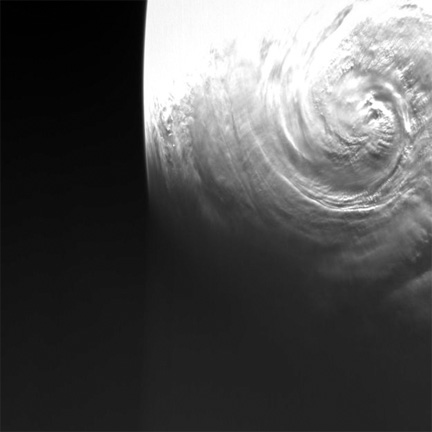 Proba-2 X-Cam image of Typhoon Soulik,
image courtesy of ESA.
[SatNews] The swirling eye of Typhoon Soulik as it approached Taiwan last Friday is caught by a tiny espresso cup-sized camera on one of ESA’s smallest satellites, Proba-2.

Less than a cubic metre in size, Proba-2 focuses on observing solar activity and space weather. But it also keeps a small eye on its homeworld. Among the 17 experimental technologies hosted on Proba-2 is the compact Exploration Camera, X-Cam. Housed on the underside of the satellite, the monochrome X-Cam observes in the visible and infrared with a 100 degree field of view. 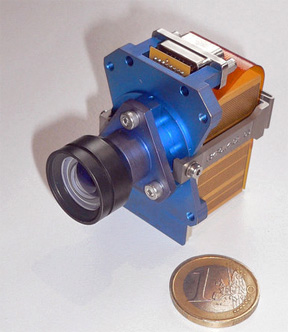 Proba-2's small X-Cam, photo courtesy of ESA.
X-Cam comes with embedded intelligence to let it judge the best automatic exposures for optimised image quality. Similar compact imagers could in future keep watch on satellite surfaces to look out for damage or environmental effects.

In 2014, the company’s miniature imager on Rosetta’s lander should provide us with our closest view yet of a comet’s surface.

The above X-Cam image of Typhoon Soulik was acquired on July 12th at 10:14 GMT.