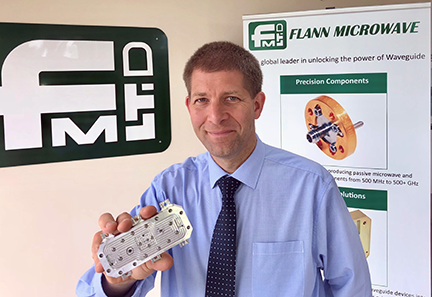 Flann Microwave is supplying vital components to NASA for a major spaceflight mission that will be making the first-ever global survey of Earth's surface water.

The multinational Surface Water and Ocean Topology (SWOT) satellite, planned for launch in 2021, is being jointly developed and managed by NASA, the French Space Agency (CNES) and the Canadian Space Agency, with contributions from the United Kingdom Space Agency. This is UK-based Flann’s first project for NASA and has seen engineers working closely with their counterparts at NASA’s Jet Propulsion Laboratory (JPL), in Pasadena, California, in developing custom-made waveguide equipment. This will be linked to the satellite’s high-resolution radar as it tracks how Earth’s water bodies change over time, with the aim of improving ocean circulation models, weather and climate predictions, and aiding in freshwater management around the world.

Flann’s spaceflight attenuators have been designed and tested to withstand the rigors of spaceflight, enabling consistent and highly accurate measurements as the SWOT satellite surveys Earth’s lakes, rivers, reservoirs and oceans and maps ocean surface height with greater detail than previously recorded. Engineering models of the components have already been delivered to and passed JPL’s spaceflight qualification tests and the final spaceflight models are due to be hand carried back to the United States by JPL personnel in the coming weeks before being installed in the spacecraft.

Professor James Watts, Chief Executive of Flann Microwave, said that this is an incredibly exciting and globally significant project which the company is proud to be a part of. — NASA is synonymous with excellence, their standards are exacting and the resources and engineering expertise at their disposal is hugely impressive. He added that there's good reason for that, as the demands of spaceflight and the need for spacecraft and their components to perform accurately and consistently in a high energy environment and across a wide range of temperatures is technically challenging.

With a 60-strong team based in Bodmin, Cornwall, UK, Flann serves customers in the telecoms, government, automotive, aerospace, defense and research sectors, exporting more than 80 per cent of production. The company has also worked with UK and overseas government agencies to write many of the standards used in the industry. Flann was recently called in by the Met Office to help improve the reliability of the UK weather radar network, supplying new hardware and technical advice as part of a £10 million upgrade to the Met Office Radar Network completed in February 2018.