RUAG Space Delivers the Brain and the Coat for Galileo Satellites

On July 25, an additional four Galileo satellites will be launched from Kourou in French Guiana, all with equipment onboard from RUAG Space, which has played an important role in building the Galileo European Navigation System from day one — a range of mission critical mechanical and electronics products have been supplied to OHB System AG. 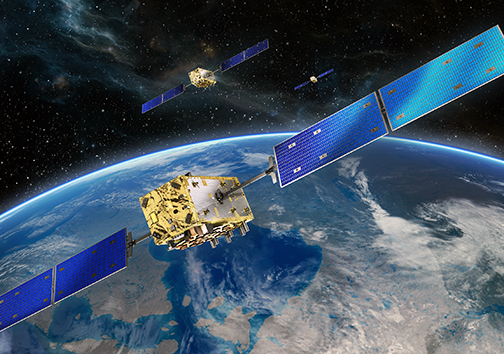 Artistic rendition of a Galileo satellite in orbit.

The European Navigation System Galileo, operated by the European Union and the European Space Agency, ESA, is approaching its full capacity. The system will be complete by 2020 and will be composed of 24 operational satellites and in-flight spares.

Galileo is a civil satellite navigation system (GNSS) that provides global positioning, navigation and timing. With at least four satellites constantly visible to the user, positioning becomes much more accurate than with previous systems, down to a meter. Galileo is operated on a limited scale since 2016 and more and more Galileo-compatible receivers, chipsets and modules are now on the market. This means, for example, that the positioning of our mobile phones becomes more accurate and reliable, especially in urban environments where narrow streets and high buildings often block satellite signals.

Other areas where Galileo plays or will play an important role include self-propelled and connected vehicles as well as in air traffic and shipping. "Galileo has direct value for our daily life and societal progress. We are proud to deliver a broad product range to make the mission a success,” said Peter Guggenbach, CEO, RUAG Space.

RUAG Space supplies to the industrial prime contractor, OHB System AG, the onboard computer (“brain”) that controls and monitors the payload of the satellite and many other subsystems. The computer also monitors the satellite status, such as temperature, to ensure that the satellites are fully functional. Further, RUAG Space contributes electronics to the Galileo search and rescue service, which will be used for locating distressed people. When Galileo Search and Rescue is in full operation, the time to detect a person who has disappeared at sea or in the mountains will be shortened from three hours to just ten minutes after activating an emergency transmitter.

Additional electronic products from RUAG Space include the receiver electronics and antennas on the satellite, which are required to determine the position of a person or object on earth.