A United Launch Alliance Atlas 5 rocket scheduled to launch a $1.1 billion military communications satellite on Thursday will carry an experimental cubesat as a rideshare payload on the back of the Centaur, the Atlas’ upper stage.

The main payload is the fifth Lockheed Martin-built Advanced Extremely High Frequency satellite, or AEHF-5. For this mission, the U.S. Air Force integrated a 12U cubesat on the Centaur’s aft bulkhead carrier. The rideshare payload will be separating before the primary payload separates, said Colonel Shane Clark, AEHF-5 mission director at the Air Force Space and Missile Systems’ Center Launch Enterprise Systems Directorate. Colonel Clark noted that this is the first time SMC has separated a rideshare payload prior to the anchor mission. The cubesat will be used to test orbital debris tracking technologies. 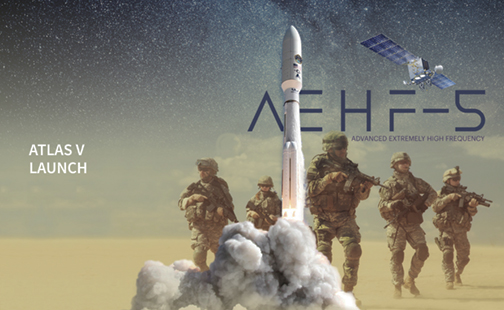 The Atlas 5 aft bulkhead carrier was originally developed for the National Reconnaissance Office to take advantage of excess capacity on big rocket to put small payloads into orbit. A newly created Launch Enterprise Manifest Office married up the the cubesat with the Centaur for the AEHF-5 mission. Clark said this is the first multi-manifest space vehicle integration executed by the new office.

The mission is on track to lift off from Space Launch Complex-41 at Cape Canaveral Air Force Station on Thursday. The rocket will fly in its most powerful configuration, the Atlas 5 551. The AEHF satellites in geosynchronous Earth orbit provide nuclear-survivable, protected communications for strategic command and tactical warfighters. They are used by the U.S. military and international partners Canada, the Netherlands and the United Kingdom.

Gary Wentz, ULA’s VP for government and commercial programs, said he does not anticipate any further delays to the AEHF-5 mission that was originally scheduled for June 27. The date had to be pushed back after a component failed during final acceptance tests. The teams removed the suspect hardware from all of the launch vehicles and the company is in the process of incorporating some minor changes to the hardware. ULA has retested and reinstalled the hardware on the vehicle.

AEHF-5 will be ULA’s 134th launch since the company was formed in 2006. It will be the ninth for the Atlas 5 in the 551 configuration with five solid rocket boosters.