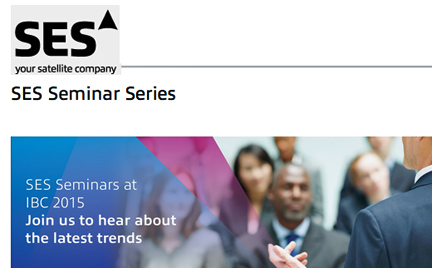 [SatNews] Operators should be keen to adopt satellite-based e-platforms if they are to achieve their full business potential in less developed countries (LDCs), advised SES Techcom Services’ Vice President Commercial Norbert Willems, as satellite connectivity can be quickly set up to fulfil such basic needs as healthcare and education in rural or poorly connected parts of the world.

In his address during the SES Seminar on day two of the IBC Conference & Exhibition in Amsterdam, Willems presented SES’s involvement in the emergency.lu deployment in Nepal, its medical e-health extension SATMED in Benin and the Space4edu project in South Africa. Satellite has been shown to not only be a quick and easy way to provide universal broadband access beyond the reach of terrestrial transmission networks, but also  enable faster election results through e-government, an initiative successfully undertaken for the Burkina Faso national elections in 2012.

“In LDCs, only 7 percent of households have Internet access compared with the global average of 46 percent,” said Willems. “As demonstrated with the Space4edu project in South Africa and our SATMED e-health platform in Benin, satellite broadband is a key factor in achieving connectivity in rural areas and a vital ingredient for socio-economic development.”

The Internet connectivity of e-platforms such as SATMED, Willems highlighted, provide a vital communication link in isolated regions, improving diagnosis and response times through satellite capacity and thereby improving healthcare available as well as facilitating the training of staff. This was demonstrated in Benin, where a satellite powered e-health platform developed by SES and SES Techcom Services has been used to share vital medical information and knowledge between three rural medical units.

Satellite-based connectivity set up by SES Techcom Services (then SES Broadband Services) was also used for the Space4Edu project last year. Twelve schools in the remote Greytown/Weenen area of the KwaZulu Natal province in South Africa were able to connect to the Internet and to e-learning and e-teaching applications. The 2014 project was part of the Ready to Read initiative (R2R), a long-standing agreement with the South African Education Department providing professional training and qualification of teachers across South Africa.

“Satellite networks are complementary to terrestrial and submarine cable networks already in place in these regions,” said Willems. “These networks enhance the overall broadband delivery ecosystem and are especially vital in disaster response communications such as emergency.lu in Nepal.”

SES set up vital communication links in Nepal earlier this year following the devastating earthquake which hit the region, wiping out the countries telecommunications infrastructure. emergency.lu kits were deployed and re-directed between neighboring nation Vanuatu and Tanna Island, enabling the Vanuatu government, the United Nations and other humanitarian organizations to cross-communicate aid responses.

“In sub-Saharan Africa, approximately 36 percent of the population lives more than 50 kilometers from a node on a fiber network, making satellite connectivity a key enabler of Internet access,” added Willems. “Just 10 percent more broadband can mean a 1.38 percent increase in GDP for developing nations, making it a lucrative proposition for operators looking to maximize their overseas operations.”

For information on the complete program of SES seminars during IBC 2015, please click here: http://www.ses.com/21331311/SES_Seminar_Series