Firefly Aerospace, Inc. (Firefly), a developer of orbital launch vehicles for the small to medium satellite market, has formed of an all-star advisory board. 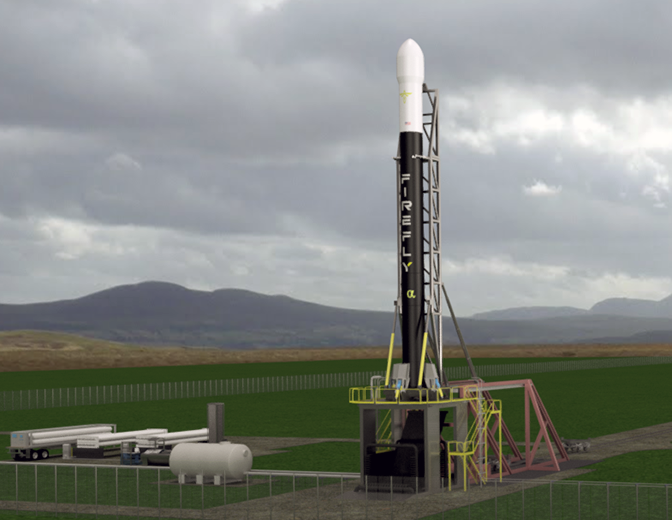 Image of the Firefly launch site with the company's Alpha rocket on the pad is courtesy of Firefly Space.

Members of the board act as ambassadors and advocates of Firefly and support the executive and management teams through consultation and strategic analysis. Initial appointments to the Firefly board are Jeff Bingham, Robert M. Lightfoot, Jr., George Nield, and William F. Readdy.

Jeff Bingham brings nearly 40 years of governmental experience to Firefly. Instrumental in shaping space station policy, he served most recently as the senior advisor on space for the U.S. Senate Committee on Commerce, Science, and Transportation. He was previously the associate administrator for NASA's Office of Legislative Affairs. Jeff played a key role in ensuring continued congressional support for the ISS as the legislative coordinator for the International Space Station program.

Robert M. Lightfoot, Jr. had a long and distinguished NASA career. Currently the President of LSINC in Huntsville, AL, Robert served as the Associate Administrator and Chief Operating Officer of NASA, the Agency's highest ranking civil servant, from 2012 until his retirement in 2018. During that time, he also served as the longest running Acting Administrator in NASA history from January 2017 until April 2018. Prior to his appointment, Robert held other prominent positions, including Director of the NASA Marshall Space Flight Center and Manager of the NASA Space Shuttle Propulsion Office.

George Nield has played a critical role in opening space to private industry. As head of the Federal Aviation Administration's Office of Commercial Space Transportation, he was responsible for ensuring public safety during all commercial launches and reentries. Previously, George served as manager of the Space Shuttle program flight integration office at NASA Johnson Space Center and as Senior Scientist at the Orbital Sciences Corporation. He holds a Ph.D. in Aeronautics and Astronautics and is a Flight Test Engineering graduate of the United States Air Force Test Pilot School.

William F. Readdy is a veteran astronaut who flew on Space Shuttle missions STS-42, STS-51 and STS-79. He served as NASA Associate Administrator for Space Flight Operations, which had oversight for the Johnson, Kennedy, Marshall and Stennis Space Centers as well as program oversight for International Space Station, Space Shuttle, Space Communications and Space Launch Vehicles. Following retirement from NASA in 2005, Readdy has served on the boards of several publicly traded, non-profits and aerospace and technology startups, and served as a chairman of the Mid-Atlantic Regional Spaceport at Wallops Island, Virginia until 2016.

Firefly CEO Dr. Tom Markusic said that the company is thrilled to have Jeff, Robert, George, and William join the Firefly team. In addition to their depth and breadth of experience, advisory board members were selected for their desire to become deeply involved in all aspects of the Firefly development program. The company expects them to challenge development assumptions and help Firefly to avoid the many pitfalls on the path to space. Their experience will bring Firefly to a new level and help the firm to fulfill its mission of providing the reliable, convenient, and frequent access to space that customers critically require.