The United States Space Force’s Space and Missile Systems Center (SMC) has decided to reschedule the launch of GPS III SV03 (GPS III-3) from Cape Canaveral Air Force Station to minimize the potential of COVID-19 exposure to the launch crew and early-orbit operators. 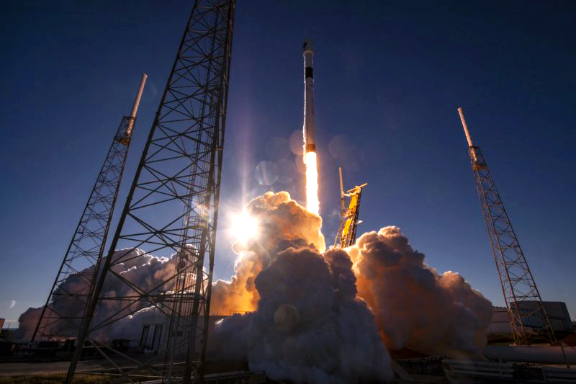 The first launch of a GPS III satellite by SpaceX aboard a Falcon 9 launch vehicle. Photo is courtesy of SpaceX.

The current GPS constellation is healthy, allowing for a strategic pause to ensure the health and safety of our force without operational impact. Originally scheduled for late April 2020, the launch is now projected for no-earlier than June 30, pending a re-evaluation in May.

GPS III-3 brings the third modernized GPS III satellite to the operational GPS mission, and the team remains ready to execute. GPS III will bring three times better accuracy and up to eight times improved anti-jamming capability than its predecessor.

The current constellation is healthy, with 31 satellites on orbit, allowing the team to take this strategic pause without gaps in coverage or capability.

“We do not make this decision lightly, however, given our GPS constellation remains strong, we have the opportunity to make a deliberate decision to maintain our mission assurance posture, without introducing additional health risk to personnel or mission risk to the launch,” said Lt. Gen. John F. Thompson, SMC commander and program executive officer for space. “The GPS system supports vital U.S. and allied operations worldwide, unabated. As the COVID-19 pandemic is a threat to national security, likewise, rescheduling the launch is in the interest of national security. We have to get it right the first time, and protecting our people is just as important as cost, schedule, and performance.”

SMC still plans to complete the next three GPS launches in 2020. The team is taking the necessary steps to protect the health of personnel to allow a swift return to the mission.

“Some of the steps include procedural and facility modifications at the GPS III Launch and Checkout Capability (LCC) operations center and reducing the onsite crew size to provide adequate physical distancing, per CDC guidelines,” said Col. Edward Byrne, Chief of Medium Earth Orbit Space Systems Division. “Once these efforts are completed, and the crews have rehearsed and are deemed proficient and ready to execute under these modified conditions, we fully intend to return to our launch cadence for deploying GPS III satellites.”