Virgin Orbit has completed a key step along the company's path to launching satellites for commercial customers.

A “drop test” of the firm's LauncherOne rocket, in which the crucial piece of its launch system was released in a free fall from its Boeing 747-based launch aircraft (nicknamed “Cosmic Girl”), has been completed with success. 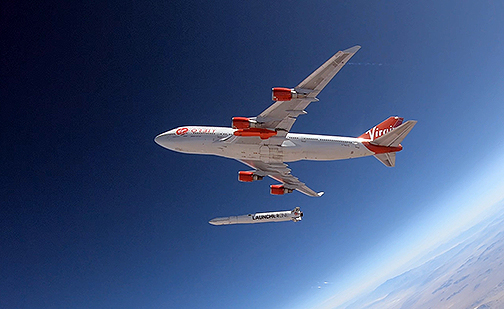 LauncherOne was released from a height of 35,000 feet — that is a typical cruising altitude for commercial airplanes, which is where it would be during an actual launch. Once the rocket is flown to  this altitude, the engine in then engaged which, the company states, is a lot more energy and cost-efficient versus launching the rocket from a ground-based launch pad.

During this test, the LauncherOne rocket did not actually engage its engine once it was detached from the wing of the modified 747. This is exactly what would occur had this been an actual launch. Rather, this dummy rocket fell 35,000 feet to the ground where it impacted in a planned drop zone at Edward’s Air Force Base in the Mojave desert.

All of this activity was according to the test plan. The main focus of this test was to study the separation of the rocket from the launch aircraft’s wing as well as to gather a number of sensor readings about how the rocket would behave when free falling through the air.

Virgin Orbit is part of Virgin’s duo of space companies, which also includes Virgin Galactic. The company's specific focus is to offer an affordable option for smallsat launches.

Next up for Virgin Orbit is to build and assemble their first, actual, orbital test rocket — a launch of this rocket is planned for later this year.