The U.S. Regulation of Space Commerce is Examined by Aerospace Corporation

The Aerospace Corporation’s Center for Space Policy and Strategy (CSPS) has released a new issue brief that analyzes the U.S. administration’s plans to significantly enlarge the space portfolio of the U.S. Department of Commerce (DOC) — the plan calls for DOC to expand its range of responsibilities beyond regulatory reform to encompass space traffic management and to promote the nation’s commercial space sector. 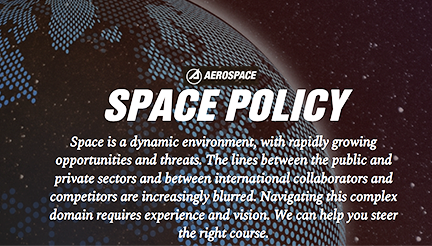 CSPS’s new issue brief, Remaking U.S. Regulation of Space Commerce, focuses on the administration’s plan to build on what had been a small DOC office to carry out an ambitious space commerce strategy and facilitate an array of emerging private-sector space activities. The author, James Vedda, Ph.D., a policy expert with CSPS, provides insight on the plan and reveals that much of it represents renewal of strategic goals that has been in place for more than a decade. He explained that what’s old is new again. Although the level of attention is new, the DOC has been involved in commercial space activities through its Office of Space Commerce (OSC) since the late 1980s.

The issue brief also highlights that the basic requirements have been in place at least since the OSC issued its strategic plan in 2007.

“Today’s focus on regulatory reform is nothing new, nor is the desire to increase government use of commercial systems, to grow the export market, or to maintain world leadership in space commerce,” said Vedda. “But for much of its time in existence, OSC has operated with only a handful of staff, limiting its ability to achieve its ambitious strategic objectives.”

The administration’s space commerce reorganization, as envisioned so far, keeps the U.S. Department of Transportation in charge of licensing and regulation of commercial launch and reentry, and the Federal Communications Commission retains its responsibility for regulating electromagnetic spectrum use. Everything else in the commercial development of space — a broad and growing field—would be handled by a “one-stop shop” at the DOC.

Although the 2007 OSC strategic plan provides a baseline for the expanded organization, Vedda explains that there is much that needs to be added as the agency examines its strategic priorities in light of the National Space Council’s current direction.

“The high priority of regulatory reform is already represented in the plan, but another high-visibility concern on the administration’s agenda—space traffic management—is not,” said Vedda. “Nor are a host of other topics that will become DOC’s responsibility in the years ahead.”

The Center for Space Policy and Strategy is dedicated to shaping the future by providing nonpartisan research and strategic analysis to decision makers. The Center is part of The Aerospace Corporation, a nonprofit that provides objective advice to the government on complex space enterprise and systems engineering problems. To read the latest publications related to space policy matters, visit www.aerospace.org/policy.