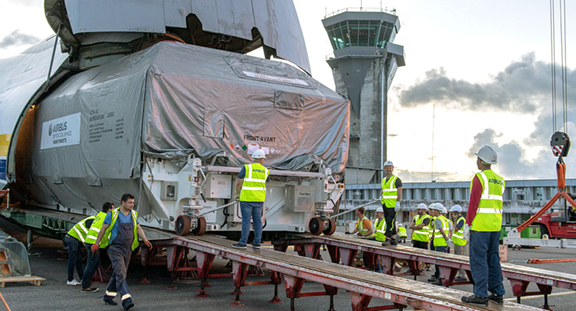 The shipping container with the TIBA-1 payload is unloaded from a chartered An-124 cargo jetliner at French Guiana’s Félix Eboué Airport. This spacecraft will be orbited by an Ariane 5 on Arianespace Flight VA250. Photo is courtesy of Arianespace.

The Spaceport is stepping up activity for Arianespace’s upcoming Ariane 5 and Soyuz missions following the delivery of three satellite passengers to French Guiana which arrived at Cayenne’s Félix Eboué Airport earlier this week aboard the same chartered cargo jetliner.

The three spacecraft – TIBA-1, CHEOPS and ANGELS – subsequently were unloaded from the An-124 aircraft for transfer by road to the Spaceport launch base, where each will be prepared for liftoff before the end of 2019.

TIBA-1 was jointly developed by Thales Alenia Space and Airbus for operation by the Government of Egypt. Based on the Eurostar E3000 satellite platform, it will be one of two passengers on Arianespace’s fourth Ariane 5 mission of the year, which is designated Flight VA250 in the company’s numbering system. Designed for a service life greater than 15 years, TIBA-1 will have an estimated launch mass of 5,600 kg. and an electric power capability that is higher than 9 kW. Its liftoff aboard Arianespace’s workhorse Ariane 5 will be performed from the Spaceport’s ELA-3 launch zone in November.

The other two spacecraft on this week’s “special delivery” to French Guiana – CHEOPS and ANGELS – will be co-passengers on Arianespace’s next Soyuz mission from the Spaceport, designated Flight VS23 and scheduled for December.

CHEOPS is unloaded from the cargo jetliner that delivered it to French Guiana’s Félix Eboué Airport (at left); while its ANGELS nanosat co-passenger on Arianespace’s Soyuz Flight VS23 mission has been prepared for transfer by road from the airport to the Spaceport. Photo is courtesy of Arianespace.

CHEOPS (the CHaracterising ExOPlanet Satellite) is a European Space Agency exoplanet mission in partnership with Switzerland and other ESA member states, which ultimately will help scientists understand the formation of planets of varying sizes. Based on an Airbus satellite platform, CHEOPS will weigh approximately 300 kg. at launch. The spacecraft will target nearby, bright stars already known to have planets orbiting around them. Through high-precision monitoring of a star’s brightness, scientists will examine the transit of a planet as it passes briefly across the star’s face. In turn, this will allow an accurate measurement of the planet’s radius. For those planets with a known mass, the density will be revealed, providing an indication of the internal structure.

ANGELS (Argos Neo on a Generic Economical and Light Satellite) is the first smallsat completely built by French industry. It was jointly financed and developed by the French CNES (Centre National d’Etudes Spatiales) space agency and industrial group HEMERIA, and will have a liftoff mass of approximately 30 kg. The smallsat is fitted with a miniaturized ARGOS Néo instrument, which is 10 times smaller than the equivalent previous-generation device. The instrument collects and determines the position of low-power signals and messages sent by the 20,000 ARGOS beacons now in service worldwide.

Arianespace’s upcoming Flights VA250 and VS23 will be the company’s eighth and ninth launches of 2019, respectively.