[SatNews] Europe’s ambitious program to create the world’s most advanced and secure air traffic management (ATM) infrastructure moved a step closer with the recent announcement by Inmarsat and the European Space Agency (ESA) of the successful completion of Phase 1 of ESA’s Iris Precursor; the ‘Final Design Review’ to validate the architecture & system design, and the safety & security of ESA’s Iris program. 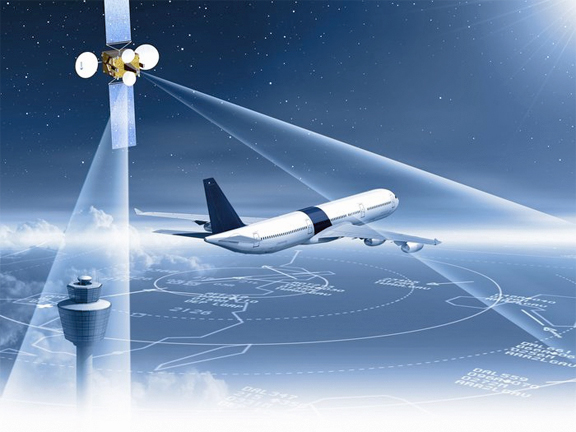 This artistic concept of Iris is courtesy of ESA–P. Carril.

The completion of Phase 1 unlocks a further 7.6 million euros funding from ESA and its partners for Phase 2, which will lead development of an enhanced satellite network to overlay existing terrestrial VHF networks to carry ATM communications over European skies.

ESA’s Iris program is part of the European Union’s Single European Skies ATM Research (SESAR) Joint Undertaking, which aims to address the annual 4 billion euros cost resulting from the shortcomings of the European ATM system.  Without SESAR and its plan to radically change the way air transport is managed in the future, flying in Europe will reach its growth limits, leading to more delays for passengers, increased costs for airlines and higher COâ‚‚ emissions.

According to the European Commission, in 2010, the European ATM system controlled 9.5 million flights and on busy days, 33,000 flights.  The forecast sees this increasing to nearly 17 million flights per year by 2030 and 50,000 flights on busy days.  In 2010 there were 19.4 million minutes delay for en-route flights. Additionally, on average, each flight travelled 49km further than the equivalent direct routed flight.

It is intended that, by 2018, ESA’s Iris Precursor program, in partnership with Inmarsat, will provide air–ground communications for initial ‘4D’ flight path control, pinpointing an aircraft in four dimensions: latitude, longitude, altitude and time. This will enable precise tracking of flights and more efficient management of traffic.  It will also facilitate SESAR’s broader flight management concepts, where flight plans can be continually updated during flight to maintain an optimal trajectory to destination. These trajectory management concepts will allow air traffic control to offer better routings, sequence aircraft far in advance and maximize airport and airspace capacity.

The ESA/Inmarsat public-private partnership results from a major funding commitment approved at ESA’s 2012 Ministerial Council, with the UK as the main contributor. While the initial focus will be on Europe, the capabilities developed will open opportunities for deployment in North America, Asia Pacific and other regions, where the growth of air traffic is placing strain on ground-based VHF networks.

Inmarsat was the first operator to meet the International Civil Aviation Organization (ICAO) safety communications requirements, and the company has been at the forefront of aviation safety developments ever since the launch of FANS in the 1990s to support safety communications for the world’s airlines.

Leo Mondale, President of Inmarsat Aviation, said, “With our long history at the forefront of safety communications, Inmarsat is the ideal partner for ESA in the development of world-leading, satellite-based, aviation safety services for Europe.  We provide vital mobile satellite connectivity to some 10,000 aircraft, delivering Automatic Dependent Surveillance Contract (ADS-C) and Controller Pilot Data link Communications (CPDLC) Future Air Navigation System (FANS) services on a global basis. This announcement marks an important milestone for Inmarsat and ESA. The European airspace is the most congested in the world, and this project will unlock the full potential of the aviation industry in the region and serve as a model for efficiently and effectively managed airspace for the rest of the world.”

Magali Vaissiere, ESA’s Director of Telecommunications and Integrated Applications, said,  “This strengthens ESA’s alignment and relationship with SESAR and demonstrates Iris is a key enabler and credible viable solution for the SATCOM element of SESAR’s air to ground network.”