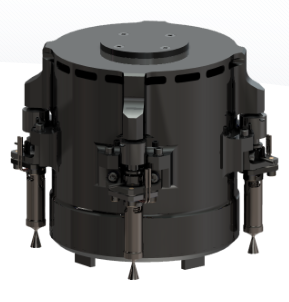 [Satnews] Aerojet Rocketdyne, a subsidiary of Aerojet Rocketdyne Holdings, Inc. (NYSE:AJRD), has entered a public-private partnership with NASA to mature the development of an MPS-130 CubeSat propulsion system using a green propellant, known as AF-M315E. Once fully developed, not only would the technology increase in-space CubeSat mission capabilities, but AF-M315E would provide a safer, more efficient and higher performance alternative than traditional hydrazine propellants.

“We’re excited about this partnership with NASA to advance CubeSat propulsion with green propellants,” said Eileen Drake, CEO and president of Aerojet Rocketdyne. “There’s no doubt it will open exciting new doors in the private and public sectors for those seeking to increase the capability of nanosats and operate them more affordably and efficiently, and with safer propellants.”

The MPS-130 green propulsion system will allow CubeSats and nanosats to increase their capabilities similar to those of much larger satellites, such as extending mission life, increasing architecture resiliency, maneuvering to higher and lower orbits, and performing complex proximity operations and formation flying.

Under the partnership, Aerojet Rocketdyne will deliver a fully integrated MPS-130 green propulsion system for flight demonstration, as well as conduct development and validation testing.

Aerojet Rocketdyne was selected for this project under NASA’s “Utilizing Public-Private Partnerships to Advance Tipping Point Technologies” solicitation, which seeks to mature technologies beyond their “tipping point.” According to NASA, the goal is to enable private industry to develop and qualify the technologies for market, stimulating the commercial space industry while delivering technologies and capabilities needed for future missions and commercial applications.

SmallSat Symposium Set For February of 2016

For a thorough immersion in the smallsat market segment, consider attending the upcoming, two-day and extremely important SmallSat Symposium. This highly informative symposium will be conducted on Tuesday, February 23, and Wednesday, February 24, 2016. The event will occur at the Hogan Lovells Conference Center in Silicon Valley, California, and is organized and sponsored by Satnews Publishers.

For further details and to register, please visit http://www.smallsatshow.com/?page_id=18