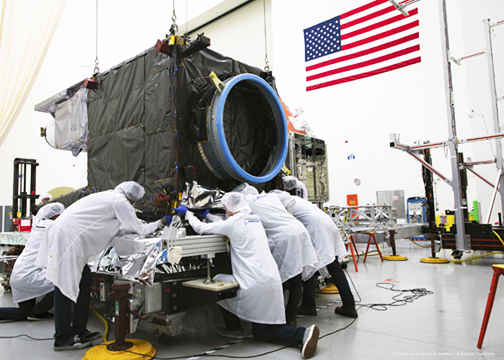 According to the WFOV program office, SMC is pleased with just how well the thermal vacuum (TVAC) campaign was conducted and the complete access to the test facility. The TVAC campaign went very smoothly and eliminated significant potential program risk.

The test teams subjected the satellite to a series of sound tests to simulate liftoff and ascent as well as to extreme temperature swings in the large thermal-vacuum chamber to simulate the space environment. The satellite’s systems were also evaluated for potential electromagnetic interference in a highly specialized, noise-free anechoic chamber.

Sponsored by the Space and Missile Systems Center and managed by NASA’s Ames Research Center, the mid-sized geosynchronous spacecraft is based on Millennium’s AQUILA M8 affordable platform series and hosts a transformational OPIR six-degree staring sensor developed under a separate contract by L3Harris Technologies.

WFOV is manifested on a United Launch Alliance ATLAS V rocket currently targeted for launch in 2021.

Major Brian Curd, Chief, OPIR Advanced Payloads and Demonstrations, said thatone of the largest hurdles remaining for the WFOV program has now been passed. All primary phases of the environmental test campaign have been completed and all look forward to buttoning up the satellite and getting it on-orbit as soon as possible. It will be a great asset to national defense.