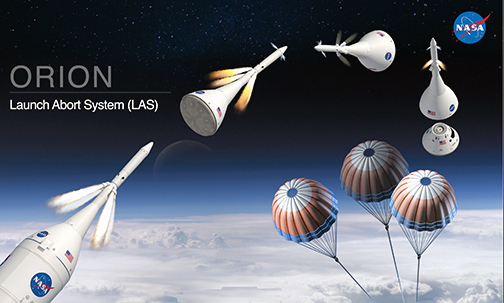 The jettison motor is one of three motors on the LAS but is the only motor that activates on every mission. It performs the critical task of separating the LAS from the crew module after a successful launch, allowing the crewmembers to continue on their journey.

In the unlikely occurrence of a launch or ascent anomaly, Orion’s LAS will rapidly separate the crew capsule from the launch vehicle. Providing 40,000 pounds of thrust, Aerojet Rocketdyne’s jettison motor helps pull the LAS away from the crew module, enabling a safe landing of the capsule and crew.

During Artemis 1, an uncrewed Orion spacecraft will launch aboard SLS and travel in a distant retrograde orbit around the Moon before returning to Earth. Prior to Artemis 1, Orion and SLS will continue to undergo a series of thorough tests to prove the launch system and crew capsule’s readiness for deep space.

Aerojet Rocketdyne CEO and President Eileen Drake said the United States is once again sending astronauts to deep space and ensuring their safety is a vital task. The company is looking forward to seeing Orion launch on SLS and to support the program for many years and missions to come.

Roger McNamara, Launch Abort System director at Lockheed Martin, added that the Orion spacecraft has undergone extensive testing to ensure the flight vehicle is prepared to manage the punishing environments of deep space. Testing the launch abort system and the jettison motor’s performance is no exception, as safety of astronauts is paramount. In addition to ground tests, the jettison motor was successfully tested as part of the LAS during Orion’s Pad Abort-1 test in 2009, Exploration Fight Test-1 in 2014 and the upcoming Ascent Abort-2 test this July.