On The Show Floor — Spacepath Communications BUCkles Down For IBC2016

Product and technology debuts are a common occurrence for companies at major trade shows, such as the upcoming IBC2016 in Amsterdam.

Take, for example, Spacepath Communications (‘Spacepath’), a European-based SATCOM high power amplifier (HPA) manufacturer that extending their range of small, lightweight amplifiers with their new STA 3407 ultralinear series. On display for the first time at IBC2016, the compact STA 3407 is a 70W DBS-band (17.3 to 18.4 GHz) outdoor amplifier weighing just 9 kg and featuring BUC and Ethernet options. This unit will be showcased at the firm's stand along with their range of HPAs that were introduced earlier this year, including:

Ku-band Satellite Block Upconverter (SAT-BUC): The 150W BUC model is the smallest, lightest and most power efficient in its class. The amplifier is fitted with an L-band input and an auto-sense internal 10MHz source. It is available for immediate shipment in single thread and redundant systems.

STA 1341 Series: A 400W Ku-band antenna mounted, outdoor HPA weighing just 13.6kg. The amplifier has an integrated lineariser assembly and offers ultralinear performance in a small, lightweight and power-efficient package. It is fitted with Ethernet and a web browser capability. The amplifier can be provided in single thread and redundant configuration.

STA 3252 Series: A 500W Ka-band outdoor TWTA which is among the lightest in its class on the market, weighing only 18kg. The amplifier is offered in 27.5-30GHz and 30-31GHz bands and includes Ethernet/web browser and optional uplink power control. The HPAs incorporate a high efficiency, multi-collector TWT powered by an advanced power supply. Available in either an air- or liquid-cooled configuration, the amplifiers feature a compact form factor and resilient design enabling them to operate across a range of extreme environmental conditions. The HPAs also include a hub mounting for use with outdoor antennas. The amplifier can be provided in single thread and redundant configuration. 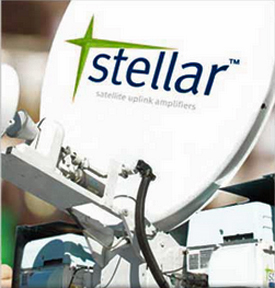 Newton Burnet, Director, Spacepath Communications stated that the launch of the new STA 3407 DBS amplifier bridges the gap between the low power solid state devices and the high power 500 and 750W amplifiers that are already in the company's product range.