Rede Amazônica Expands HDTV Distribution to the Amazon via Intelsat-14

Intelsat S.A. (NYSE: I) announced that Rede Amazônica, an affiliate of Rede Globo, will rely on Intelsat to accelerate and expand the reach of their high definition (HD) programming via digital terrestrial television (DTT) broadcast in the Amazon region of Brazil. 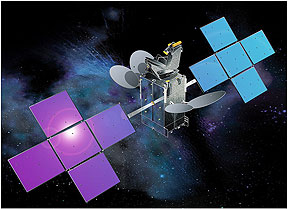 Artistic rendition of the Intelsat-14 satellite.

Image is courtesy of SSL.

The strength and reach of Intelsat’s video neighborhoods in Latin America offers Rede Amazônica the opportunity to consolidate the production and distribution of 13 HD channels to one location, allowing it to reduce operational costs and simultaneously expand its regionalized content offerings in the Amazon.

Phelippe Daou Junior, Rede Amazônica’s President and CEO, said that through Rede Amazônica, viewers across the Amazon region will have access to high quality, informative and entertaining television conten. With Intelsat, the company can broaden the firm's reach and provide more affordable and differentiated programming to viewers. The quality, reliability and reach of Intelsat’s video neighborhoods enable the company to achieve significant operational savings while at the same time increasing viewership and enhancing the service offerings that the firm delivers to households across the Amazon.

Rob Cerbone, Intelsat’s VP and GM, Media, added that Intelsat 14 provides Rede Amazônica with unprecedented quality, reception and reach, enabling them to cost effectively expand their DTT service offerings throughout the northern region of Brazil. As Digital Terrestrial Television allows for a more efficient use of spectrum, Rede Amazônica can further differentiate the type of informative and entertaining content it provides to existing and new viewers.