SENER Aeroespacial and CATEC have completed the delivery of the telemetry and telecommand antennas for the European Space Agency's PROBA-3 mission, for which SENER Aeroespacial is the prime contractor of the entire mission.

This group of antennas includes the first one made by SENER Aeroespacial using metal 3D printing (additive manufacturing). This is one of the first space antennas in the world developed using this technology, and the first one made in Spain, which is a milestone for the Spanish space industry. It also reaffirms the vision of both institutions, SENER Aeroespacial and the research organization CATEC, that it is feasible to use this type of solution as an alternative to conventional manufacturing technology in those cases where the latter does not offer a viable solution. 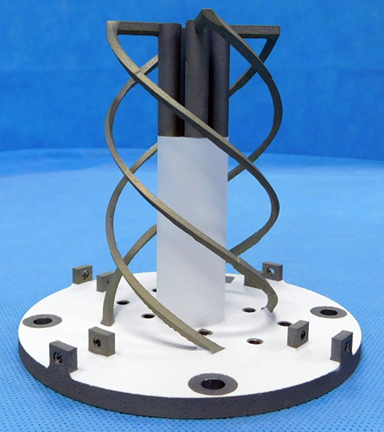 This is one of the first space antennas in the world developed using this 3D printing technology, and the first one made in Spain, which is a landmark for the Spanish space industry.

In recent years, SENER Aeroespacial has been providing and participating in several high- and medium-gain antenna pointing systems for the ESA's main science missions, such as BepiColombo, Solar Orbiter, Euclid and Juice. As part of developing these systems, SENER Aeroespacial designs, verifies and integrates key communications elements, most notably the antennas and the rotating joints integrated inside the mechanisms.

Within this framework, SENER Aeroespacial and CATEC worked to develop a helical antenna that was printed with an aluminum alloy and subjected to demanding verification and qualification tests, which resulted in obtaining the flight acceptance for the European Space Agency's PROBA-3 mission.

CATEC, along with Airbus, has already developed the titanium supports for the solar panels of a telecommunications satellite (a milestone in Europe due to the criticality of the components) and more than hundred fittings, brackets, fairings and other applications for the aeronautical and space industry. Together with the company CITD, CATEC has also developed titanium and aluminum hoisting tooling for the CHEOPS satellite, and they are currently working on developing the secondary structure for the JUICE mission, as well as other hardware for the Ariane launcher. 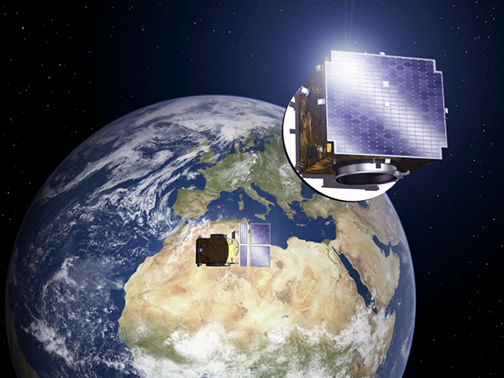 Artistic rendition of the PROBA-3 mission. Image is courtesy of the European Space Agency.

Dr. Fernando Lasagni, Technical Director (Materials & Processes) at CATEC, said SENER Aeroespacial came to the company in 2016 with the challenge of developing a helical antenna for the European Space Agency, and with a real chance of flying. The functional requirements of this product take to the limits additive manufacturing due to the dimensional tolerances for producing such a complex geometry. The experience CATEC has gained in other programs where the organization has developed flight components made of titanium alloys was essential for SENER Aeroespacial and the European Space Agency to trust in this team of engineers and researchers for this ambitious project.

Esteban Celemín, Project Manager for the PROBA-3 antennas at SENER Aeroespacial, added that the company found the perfect partner and ally in CATEC to achieve the complicated goal of manufacturing and qualifying the first 3D-printed metal antenna, with all the advantages that entails, while maintaining both radio-frequency and thermo-mechanical performance. Both CATEC's previous experience and knowledge and the good communication between the work teams proved fruitful in developing procedures that not only allowed us to deliver the first 3D-printed antenna, but that laid the foundations for future collaborations in which this technology can add value to any SENER Aeroespacial product.