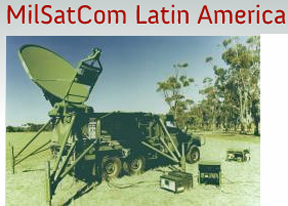 [SatNews] Latin America has been a prominent region in advancing its SATCOM capabilities with countries such as Brazil, Chile and Mexico all either launching, or planning to launch, domestic satellite programs.

MilSatCom Latin America 2015, which will occur from September 22nd through the 23rd at the Maceio Atlantic Suites in Maceio, Brazil, is now in its second successful year and is the only regional meeting place for military satellite communications specialists and all those responsible for optimizing security and surveillance of national and air space and key domestic assets.

Featured speakers and presentations include...

To download the complete event agenda, select this infopage link.

For more information on the conference and workshop visit http://www.milsatcom-latinamerica.com/