Honeywell Selected by Lockheed Martin for Their Control Actuation System

Artistic rendition is courtesy of Honeywell.

An actuator is a type of motor that is responsible for moving or controlling a mechanism or system, typically operated by electric current, hydraulic fluid pressure or pneumatic pressure. Reliable steering controls are critical to precision directional control in tactical missiles and guided munitions. Honeywell space actuation, thrust vector control actuators and electronic control systems and are, according to the company, the most weight- and energy- efficient and reliable and built upon an earned legacy of more than 30 platforms including some of the most modern in the International Space Station and including the systems which pioneered thrust vector controls on the Mercury, Gemini, Apollo and Space Shuttle systems.

Work performed under the multiyear contract will enable rockets from Lockheed Martin’s advanced missile system to effectively control and steer their way over the battlefield at growing distances, eliminating mission-critical targets with less collateral damage and ensuring soldiers can remain farther from the fight for better safety. Honeywell’s control actuation system is essential to the reliable delivery of rockets. The system is composed of a control unit and four actuators that independently position fins placed around the rocket to improve its direction in flight. 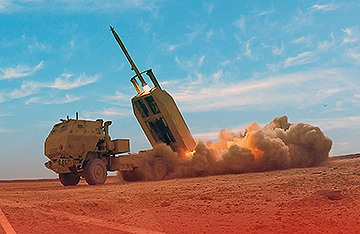 Photo is courtesy of Lockheed Martin.

As the battlefield continues to evolve for domestic and international military forces, the need to accurately place rockets at greater distances plays a bigger role in missions. Honeywell provides a range of solutions, from advanced inertial measurement units used for navigation in global positioning system satellite-denied environments to actuators that course correct a rocket in flight, to give military forces the most capable tools available to accomplish their mission and keep warfighters safe by placing them farther from conflict.

Stevan Slijepcevic,President, Mechanical Systems and Components, Honeywell Aerospace, said that the company's leadership in missile guidance is earned through reliability and performance; however, additive manufacturing and innovative design practices are helping the firm stay ahead and meet the needs of Lockheed Martin. Excellent promise has been witnessed from additive manufacturing on the aerospace side, with faster design and production, and now the company's defense products are better for it, as well. Weight has been reduced, costs removed and supply times shortened so that the company's control actuation system is delivered to Lockheed Martin within affordability targets without compromising on performance or integrity.