This company's innovative solution will change the real estate of the world of antennas. No more large antenna farms with parabolic dishes with ThinKom Solutions new gateway concept. 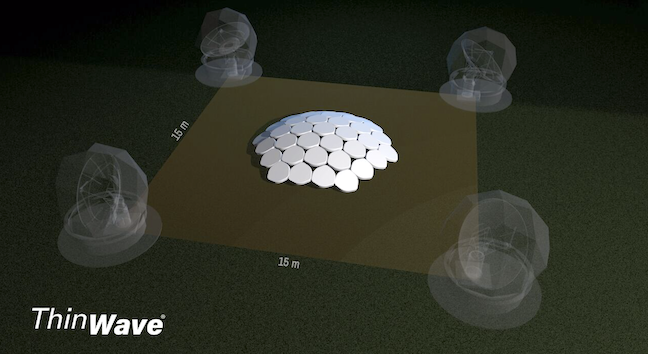 The new gateway concept, which ThinKom describes as an “array of arrays,” will provide a superior alternative to the large “antenna farms” of parabolic dishes currently used for support of geostationary (GEO) satellites. It is based on ThinKom’s proven phased-array antenna technology, which is currently in use on over 1,300 commercial aircraft installations worldwide, in 10M+ hours of proven high-reliability operation.

Bill Milroy, Chairman and Chief Technology Officer of ThinKom Solutions said that the proliferation of cubesats, nanosats, microsats and other miniaturized satellites will require a new way of thinking when it comes to gateway antenna technology. The answer is not to deploy more and larger dish farms. Instead, they’re proposing an entirely new paradigm that’s designed for the future yet employs currently available proven phased array technology.

Current-generation gateways employ large parabolic dishes that are necessarily limited to one link per dish. Further, they are unable to repoint quickly to a different satellite, given their complex drive mechanisms. These legacy systems are large, heavy, expensive to install and maintain, and can take months to deploy. Additionally, they are adversely affected by wind, snow, and ice loading and typically require a substantial concrete foundation or reinforcement of roof structure to support the weight and uplift forces of several thousand kilograms resulting from even moderate wind conditions. These multi-dish gateway sites must allow for sufficient separation in order to avoid dish-to-dish blockages, often requiring a relatively large swath of real estate.

ThinKom’s approach uses multiple, tightly arranged, phased-array antennas, which are coherently (and reconfigurably) combined. The antenna units work together to track multiple LEO, MEO and GEO satellites simultaneously with look angles between 5 and 90 degrees in elevation and full 360-degree coverage in azimuth. The software-defined system is reconfigurable in that a single array is capable of supporting multiple links, modifying the number of beams and radiation properties dynamically to meet the link budget and throughput demands of the ever-changing number of satellites in view. It does all this without the high-power consumption of electronically scanned arrays, which is a critical feature in areas that rely on solar power or are otherwise energy-constrained due to geographic location.

The array, to be initially deployed in S- and X-band operation (with higher frequencies brought on line as the market demands), is constructed in a fixed convex shape in order to provide maximum low-elevation coverage and minimize signal blockage while promoting the shedding of rain and snow. The visual signature of an array is less than two meters tall serving to eliminate the effects of high wind conditions and the footprint for a typical array (equivalent to eight 2.4-meter dishes or three 4.5-meter dishes or any mixed combination) occupies less than seven square meters, uniquely enabling flexible deployment in areas with limited real estate, such as rooftop locations.

Milroy continued that this radical new gateway concept is inherently flexible and scalable with far lower installation and maintenance costs. The low power and built-in redundancy provide greater reliability without routine maintenance, and individual units are hot-swappable in order to minimize or even eliminate downtime.”

He added that most importantly, they’re not out to reinvent the wheel. This solution uses their patented, proven phased-array antenna technology that is in service today, minimizing R&D and time-to-market.