[SatNews] For more than 15 years, a $518-million military weather satellite sat in a clean room waiting for the day it would be launched...Spy satellites would take pictures of the Soviet Union and other countries on 70-millimeter film in a canister—32,000 feet worth...

For more than 15 years, a $518-million military weather satellite sat in a clean room at Lockheed Martin Corp.'s facility in Sunnyvale waiting for the day it would be launched into orbit from Vandenberg Air Force Base.

On Thursday morning, the spacecraft is finally set to be blasted into space atop Atlas V rocket.

It will be the latest satellite launched in support of the military's long-running Defense Meteorological Satellite Program, a satellite system initiated in 1962. Since then, the program has enabled military officers to detect developing storms and alert communities of the danger headed their way.

The rocket launch scheduled for 7:46 a.m. PDT would be the first of the year for the team at Vandenberg's 30th Space Wing.

"I am proud of this launch team, which has been working tirelessly toward this launch for months," Col. Keith Balts, the Air Force commander of the space wing, said in a statement.

Vandenberg, on California's Central Coast between Lompoc and Santa Maria, has been the site of military space projects for more than half a century.

The base covers 98,000 acres along the Pacific and has been the primary site for launching spy satellites since the beginning of the Cold War. It has an ideal location for putting satellites into a north-to-south orbit. 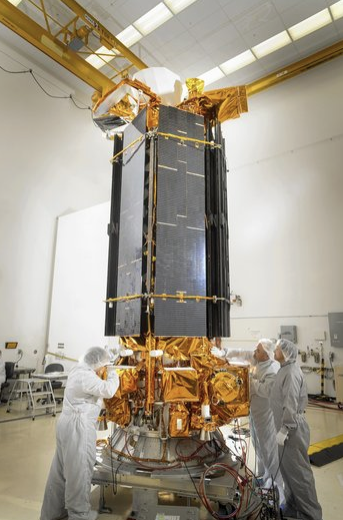 The 2,720-pound weather satellite is designed to circle the Earth at an altitude of about 500 miles in a near-polar orbit, continuously sending down imagery for worldwide forecasts. Each spacecraft has been developed to scan an area 1,800 miles wide and cover the Earth in about 12 hours, the Air Force said.

The satellites are designed to help identify and determine the intensity of thunderstorms, hurricanes and typhoons for the U.S. military worldwide. The system also provides extensive weather data to the public through the National Oceanic and Atmospheric Administration.

In the early 1960s, the Defense Meteorological Satellite Program was highly classified because it supported the CIA's first spy satellites.

At the time, spy satellites would take pictures of the Soviet Union and other countries on 70-millimeter film in a canister. When all the photographs were taken—all 32,000 feet worth—the satellite would drop the can above the Pacific, where it would be snatched in midair by military aircraft, or from the sea by ship.

The weather satellites were ideal for government officials, who could make sure there was no cloud coverage and that the photos taken would be the best quality.

In its 50-year history, 41 of the satellites have been successfully launched. The spacecraft were initially designed to spend just three to five years on orbit, but many have exceeded that lifetime.

Two satellites remain to be launched, including the one at Vandenberg. The next one is set to blast off as needed, tentatively in 2020.

The satellites, built by Lockheed and Northrop Grumman Corp., were manufactured in East Windsor, N.J. When the facility closed in the mid-1990s, they were transferred to Sunnyvale, Calif., for storage, functional testing and upgrading.

In August, the Air Force packed up one of the satellites on a C-17 Globemaster III aircraft and transferred it to Vandenberg.

Now it sits atop an 18-story rocket on Space Launch Complex 3.