JCSAT-17 and GEO-KOMPSAT-2B Prepped by Arianespace for Launch

The two satellite passengers for Arianespace’s next Ariane 5 mission – scheduled for liftoff in February – are advancing through their pre-flight preparations during parallel activity in French Guiana.

Riding in the upper position of Ariane 5’s dual-payload dispenser system will be JCSAT-17. This is a telecommunications satellite for SKY Perfect JSAT Corporation, built by Lockheed Martin. Based on the A2100 platform, the spacecraft’s main coverage zone will be Eastern Asia, including Japan.

South Korea’s GEO-KOMPSAT-2B – produced by the Korea Aerospace Research Institute (KARI) – will be deployed as the mission’s second passenger from Ariane 5’s lower payload position. Once in orbit, it will be used primarily for ocean and Earth environmental monitoring. 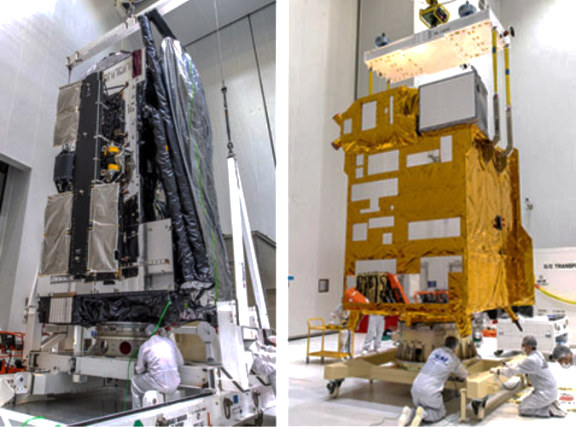 During activity in the Spaceport’s S5 payload processing facility, JCSAT-17 is raised to the vertical position for removal from its protective shipping container (at left), while GEO-KOMPSAT-2B is installed on a dolly for its pre-launch preparations (photo, right).

Photos are courtesy of Arianespace.

Both spacecraft, which will be deployed in geostationary transfer orbit (GTO) during the Arianespace mission, are undergoing their preparation activity in the Spaceport’s S5 payload processing facility.

The launch of JCSAT-17 and GEO-KOMPSAT-2B is designated Flight VA252 in Arianespace’s mission numbering system – signifying the 252nd liftoff of an Ariane-series vehicle from Europe’s Spaceport in French Guiana.

As Arianespace’s second launch in 2020 from the Spaceport, Flight VA252 follows the company’s year-opening Ariane 5 success performed on January 16 – which delivered the EUTELSAT KONNECT and GSAT-30 satellites into GTO.

Arianespace is targeting a record mission count in 2020 – with as many as 12 opportunities identified from Europe’s Spaceport in French Guiana using Ariane 5, Soyuz and Vega; along with the maiden flights of the Ariane 6 and Vega C launch vehicles. Additionally, eight more Arianespace missions are possible from the cosmodromes at Baikonur and Vostochny.