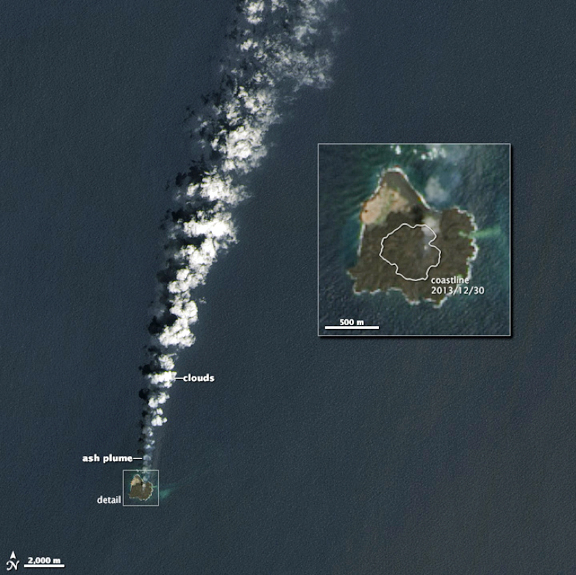 [SatNews] In November 2013, a seafloor volcano in the western Pacific Ocean spewed enough material to rise above the water line—the new island, or Niijima, sprouted just 500 meters from Nishino-shima, another volcanic island that had last erupted and expanded in 1973–74.

Four months later, the new and the old are now one island, and the volcanic eruption shows no sign of abating.

On March 30, 2014, the Operational Land Imager on the Landsat 8 satellite captured this image of Nishino-shima, which sits about 1,000 kilometers (600 miles) south of Tokyo in the Ogasawara Island chain (approximately 27°14’ North, 140°52’ East). The enlarged inset photo includes a white outline depicting the extent of the new island on December 30, 2013. The Niijima portion of the island is now larger than the original Nishino-shima, and the merged island is slightly more than 1,000 meters across. Two cones have formed around the main vents and stand more than 60 meters above sea level, triple the highest point of the island in December. Volcanic lava flows are reported to be most active now on the south end of the island. Volcanologist and blogger Erik Klemetti noted earlier in 2014, “This is a great example of how volcanic islands like this in the Bonin Islands grow over hundreds to thousands of eruptions.”

A plume of volcanic gas, steam, and ash rises from the island. Tiny particles in the plume are seeding the formation of fluffy cumulus clouds. The intermittent, pulsing shape of the cloud stream might be a reflection of the volcanic eruption itself. Strombolian explosions are essentially bubbles of lava and gas rising from Earth’s interior in pulses. Underwater, sediment appears to be stirred up in a green plume that stretches eastward from the island.