'Green Fuel' to be Used by NASA for the First Time

A non-toxic, rosé-colored liquid could fuel the future in space and propel missions to the Moon or other worlds.

NASA will test the fuel and compatible propulsion system in space for the first time with the Green Propellant Infusion Mission (GPIM), set to launch this month on a SpaceX Falcon Heavy rocket.

The mission will demonstrate the exceptional features of a high-performance “green” fuel developed by the U.S. Air Force Research Laboratory (AFRL) at Edwards Air Force Base in California. The propellant blends hydroxyl ammonium nitrate with an oxidizer that allows it to burn, creating an alternative to hydrazine, the highly toxic fuel commonly used by spacecraft today. 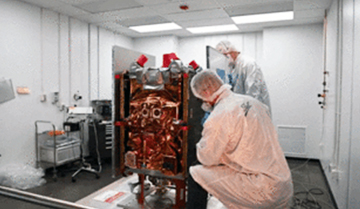 The “green” propellant developed by the U.S. Air Force Research Lab will be tested in space for the first time with GPIM.

Photo is courtesy of Ball Aerospace.

Christopher McLean, principal investigator for GPIM at Ball Aerospace of Boulder, Colorado, said that spacecraft could be fueled during manufacturing, simplifying processing at the launch facility, resulting in cost savings. The company is leading this NASA technology demonstration mission. He added that GPIM has the potential to inspire new ideas and new missions.

Another perk of the propellant is performance. It’s denser than hydrazine and offers nearly 50% better performance — equivalent to getting 50% more miles per gallon on your car. This means spacecraft can travel farther or operate for longer with less propellant onboard. 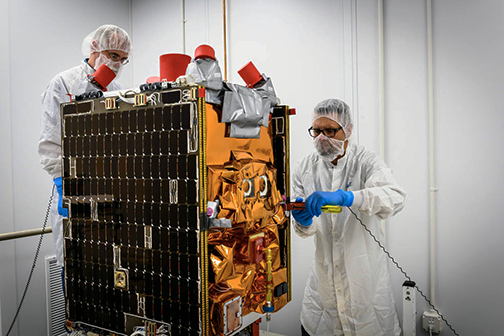 Photo is courtesy of Ball Aerospace.

In order to tap into the propellant’s benefits, engineers first had to develop new hardware — everything from thrusters and tanks to filters and valves. GPIM uses a set of thrusters that fire in different scenarios to test engine performance and reliability. Planned maneuvers include orbit lowering and spacecraft pointing.

Aerojet Rocketdyne in Redmond, Washington, designed, built and extensively tested the GPIM propulsion system. The hardware consists of a propellant tank and five 1-Newton thrusters to carry the non-toxic fuel.

Fred Wilson, director of business development for Aerojet, has decades of experience in spacecraft propulsion systems. Wilson gave credit to NASA for funding the technology, through flight demonstration. Taking the green propellant from the lab to space insures the capability can be fully adopted by government and industry. Building upon the GPIM work, Wilson says Aerojet is moving forward on a range of other thrust-level propulsion systems to utilize high-performance green propellant. He noted that NASA sees interest in using green propellant across the space industry. The trend is toward smaller and smaller satellites, to do more mission in a small package.

Dayna Ise, executive for NASA’s Technology Demonstration Missions program that manages GPIM, said that if it weren’t for the initial investment and inherent risk of doing something for the first time, this technology would likely already be in space. NASA stepped up to fund it because the agency sees the value and potential for this technology to propel spaceflight forward.”

The technology appeals to smallsat builders who have small budgets and serious space and weight limitations. From smallsats to large spacecraft, there’s a wide range of space missions that can benefit by using green propellant.

GPIM will illustrate the benefits of the green fuel and help improve how satellites are designed and operated. The propellant and propulsion system could be used in place of hydrazine regardless of a spacecraft’s purpose or destination.

NASA has been charged to land humans on the Moon in 2024 and establish a sustainable presence by 2028. There is potential for this technology to be used for a variety of lunar missions within the Artemis program, but first it must be demonstrated in space.

GPIM is a technology demonstration mission made possible by NASA's Space Technology Mission Directorate (STMD). It draws upon a government-industry team of specialists from NASA, Ball Aerospace, Aerojet Rocketdyne and AFRL. GPIM is one of over 20 satellites launching as part of the Department of Defense’s Space Test Program-2 (STP-2) mission, which is managed by the U.S. Air Force Space and Missile Systems Center.

For more information about the NASA missions launching on STP-2, visit: https://www.nasa.gov/spacex