LandSpace Technology Corporation Ltd., based in Beijing, China, recently closed their Series B round, led by Goldwind, which was joined by existing investors including Shiji Tianhua, Guokai Ronghua, FounDream and PGA Venture Partners.

The latest investment, along with the several rounds the company raised before, brought its total funding to more than 500 million yuan (approximately $79 million).

LandSpace is a private rocket developer and manufacturer founded in June 2015 by a group of top technical experts from state-owned organizations. The company is working on China’s first privately funded liquid rocket engine and a medium-sized liquid oxygen (LOX)/methane-fueled launch vehicle.

The company's focus at the current stage is the development of a rocket engine powered by LOX and methane. This actually represents a trend in the commercial aerospace industry: LOX and methane are used as propellants by both SpaceX’s Raptor and Blue Origin’s BE-4. Liquid-fuel engines are more technologically demanding than engines that use solid propellants and therefore take more time to develop, but once you crack them, you nail the most important part in building a spacecraft.

In March 2018, LandSpace successfully tested the thrust chamber of its proprietary LOX/methane engine Phoenix. According to people familiar with the matter, LandSpace will conduct hot-fire tests on engines of all sizes at the end of this year, an important step towards the launch of its prototype engines. 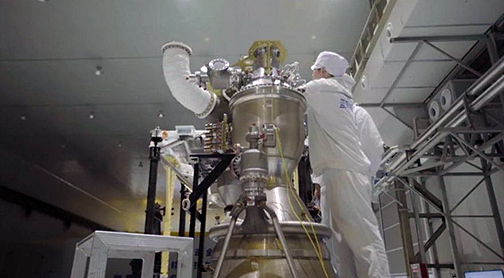 The TQ-12 methalox engine being assembled at the Huzhou, China, manufacturing facility.

Photo is courtesy of Landspace.

LandSpace put into operation its R&D centers in Beijing and Xi’an in tandem after 2015. Once the LandSpace Intelligent Manufacturing Base in Huzhou starts operation, the company will see faster progress in engine development, LandSpace’s team noted.

LandSpace’s main products are medium-sized launchers powered by LOX and methane. In the next two years, the company will remain focused on the development and manufacturing of LOX/methane engines and carrier rockets. It will target the small- and medium-sized launcher market worldwide by providing standard launch services.

LandSpace plans to equip itself with the ability to independently design, manufacture, assemble and test LOC/methane engines in three years and complete the assembly and testing of its medium liquid launcher by 2020, with the goal of growing into a company with presence throughout the value chain of medium launch vehicles, from R&D, design to the final launch.

LandSpace has also developed LandSpace-1, a small, solid-fueled four-stage launcher with a payload of 300 kg. and the first rocket orbital launch vehicle in China developed by a private company and is expected to finish production during the second half of 2018.

The business model of commercial rocket companies is simple. They design and manufacture rockets and work together with launch sites and tracking, and control companies to provide downstream clients with rocket launch services. At present, space launch remains a seller’s market as the manufacturing of carrier rockets and the launch services provided worldwide are far from meeting the demand for satellite launches.

As the company’s team has more experience and channel resources in overseas markets, the orders it has received so far are mostly from outside China, said Zhang Changwu, founder of LandSpace, but it has also been approached by some domestic research institutes.

LandSpace employs a team of approximately 140 people at the moment.