Astrome Gearing Up to Distribute Satellite Internet to Emerging Economies

The company has designed a satellite constellation that will complement terrestrial fiber and support the expansion of 4G and upcoming 5G networks into remote and rural areas and will also meet the ever-increasing data demand from consumers and Content Distribution Networks, such as Netflix and Amazon.

Having developed and patented its millimeter wave wireless communication technology, Astrome is now gearing up to launch SpaceNet —- an LEO constellation of 198 ultra-High Throughput Satellites (ultra-HTS). The company is building its financial layer using blockchain technology.

Astrome’s French subsidiary has created the SPW token that tokenizes all of SpaceNet’s data services. The tokenization will allow the company to pre-sell its internet services. Users possessing the tokens can access the firm's internet offerings in the service regions, or, enable other users to access the company’s internet services after the constellation is launched. Astrome’s Initial Coin Offering (ICO) is ongoing under the French jurisdiction and SPW tokens may be purchased at https://www.astrome.io. The ICO adheres to the guidelines set out in the new French PACTE law. Astrome also has additional incentives to users who wish to purchase bulk capacity.

SpaceNet, with its total network capacity of 24 Tbps, is uniquely positioned to meet the growing demand for high capacity networks. In addition to fueling the 5G revolution with quality satellite backhaul, SpaceNet will also provide affordable, shore-like services to mariners and tourists who are sailing on the high seas. This would be a remarkable improvement from current state-of-the-art maritime connectivity which is sparingly available and exorbitantly priced. SpaceNet will also provide Direct-To-Home (DTH) internet and users can access the service with a flat, box-shaped integrated antenna equipment mounted on the rooftop. 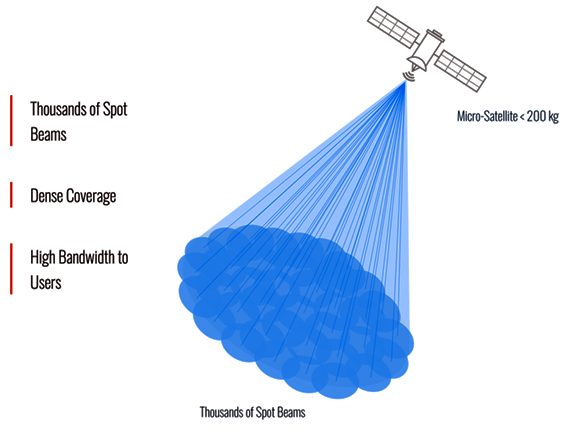 There are a number of competitors all launching a much higher number of satellites than Astrome’s 198 satellites. Astrome differentiates itself by its patented technology, which offers 10 times more data throughput per satellite and 8 times lower CAPEX cost. Their patented technology has already been proven on the ground and the company plans a space test for early next year.

Astrome started out in 2015 as a startup incubated at the Indian Institute of Science (IISc), Bangalore. Since then, the company has developed an innovative mmWave communication technology for both terrestrial and space communication. 'GigaMesh', Astrome's product for the telecom markets, enables operators to upgrade their existing networks without laying additional fibre and serve their customers better. The product launch is expected to be later this year.