At the Advanced Television infosite, journalist Chris Forrester is reporting that Turkey’s Türksat existing 3A, 4A and 4B fleet is to be expanded, this according to the country’s Transport & Infrastructure minister.

Minister Cahit Turhan said that Turkey will provide services from Asia to Africa and Europe, with its  fleet of six satellites — the coverage will extend to the Türkic republics and China, he said. The current Turkish satellite fleet also includes three scientific missions (Götürk-1, Göktürk-2 and Earth observation RASAT). 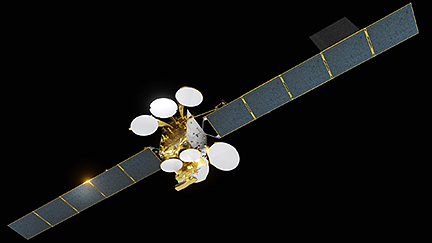 Artistic rendition of the Türksat-5A satellite.

Image is courtesy of Airbus.

Turkey operates satellites at three different longitudes and is planning to place another, Türksat 5A, which is under manufacture, at 31 degrees East longitude, Turhan said, adding that Türksat 5A is being made to earn new rights of frequencies. Türksat 5B, on the other hand, will increase the capacity at 42 degrees East longitude and will use new frequency rights.

Türksat 6A, is planned to be at orbit in early 2022, Turhan said. He also added that the satellite is currently being manufactured at the Space Systems Assembly, Integration and Test Center, located at Turkish Aerospace (TAI) premises in Turkey’s capital city, Ankara.